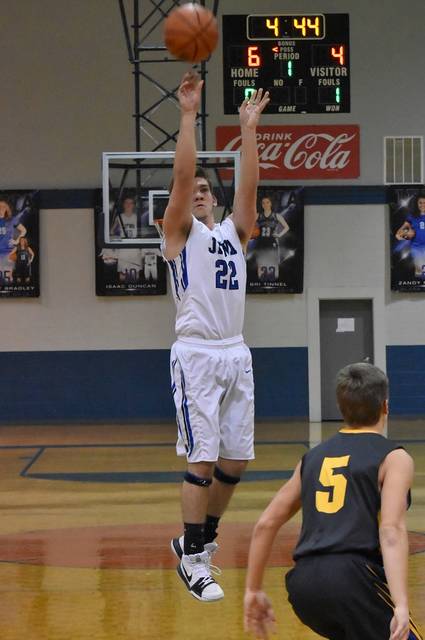 Tri-Cities Christian School and the J. Frank White Academy played two games of basketball, February 15 at Mars Gymnasium. It was a time to also celebrate a milestone as Jake Gross scored his 2,000th point as a Knight.

During the girl’s game, it was Bereya Piercy who led the Lady Knights to an impressive victory over the Lady Eagles, 47-16. Kinsee Lefevers dropped in 14 points and Kyla Piercy had 12 points.

The boy’s team had lots to celebrate including a convincing 74-56 win over the Eagles plus a milestone by Jake Gross when he hit his 2,000th point as a Knight. Gross started off slow against the Eagles as he only had one basket during the opening period. From that moment on Gross had one of his better games as a Knight and dropped in 31 points. Tanner Brush had 20 points. Jake Yeary had 18, Patrick Moore had four and Adam Turley finished the game with a single point. Drew Correll led the Eagles in scoring with 16.

The Knights as a team had a quick start as they had 19 first period points but they did their most damage in the third with 24 points in route to a 74-56 victory.

After the game the team celebrated the victory and the milestone by Gross.

Gross had 478 points as a freshman and followed that season up with 562 points. He finished his junior season with 410 points and exploded during his senior year with 641 points.

The Knights would like to congratulate Gross on his milestone.