‘If the water don’t rise’

<p>Courtesy photo</p> <p>Harrogate resident Todd Hamlin regularly deals with rising floodwaters that have plagued him since 2011. This photo shows the results from a torrential rain that created a pond in his yard, measuring some 8 ft. in depth.</p> 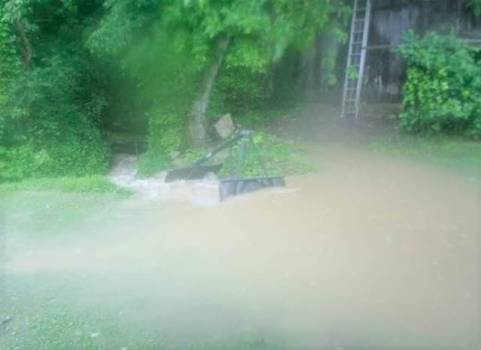 <p>Courtesy photo</p> <p>Rainwater runoff continues to pour into a cave that houses a wellspring feeding homes along a portion of Providence Road in Harrogate. Numerous attempts to divert the water by homeowner Todd Hamlin are thwarted each time the area is hit by torrential rains. Hamlin has spent more than $10,000 in the last several years to create and maintain ditch lines and culverts to redirect the runoff on his and his aunt’s properties.</p>

A Harrogate man has spent the last several years battling dread of the elements each time a weather report predicts heavy rainfall in his area. Since 2011, Todd Hamlin has fought mostly a losing war against the proverbial rising creek in the form of runoff into his and his aunt’s properties.

“It started flooding real bad after the floods of 2011. Then, it seemed to get worse. I put ditch lines and culverts in around my property to try and drain it, because there was nothing along the side of the road catching the water going into the cave,” said Hamlin.

“About four or five years ago, during the big snow we had, a grader came by and knocked some dirt away from the property. That caused the water to flow into my aunt’s driveway in the back, going into the back of my house and into the cave.”

During a torrential downpour in 2011, Hamlin’s property flooded to the point where water rose some 8 ft., creating a pond in his yard. His home rose 6.5 inches off the block work foundation.

He says that he was unable to receive any assistance from FEMA (Federal Emergency Management Agency).

Hamlin, who is now disabled, says he is caught in a ‘catch-22” of sorts. The Claiborne Road Department is responsible for just so many feet of right-of-way and cannot go onto private property.

“I’m in no way trying to get Mr. Pittman (Ronnie Pittman, superintendent of the Claiborne Road Department) into trouble. His hands are tied,” said Hamlin.

Pittman visited the Providence Road residence on March 9 to assess the situation. According to Hamlin, the road superintendent discussed having his department dig ditches along both sides of the roadway.

Meanwhile, Pittman will be contacting an engineer to see if there is a better drainage method, Hamlin said.

Of significant concern is the regular flooding of a cave that is technically on a neighbor’s property – a situation in which Hamlin has no control. The cave houses a wellspring that is the only source of water for those neighbors living nearby.

Hamlin says he is concerned that the rainwater runoff pouring into the cave could be contaminating the well spring.

“That water could have E-coli in it. I don’t have the money to pay to have it tested,” said Hamlin.

The Claiborne Progress is following this story and will provide updates, as new information becomes available.