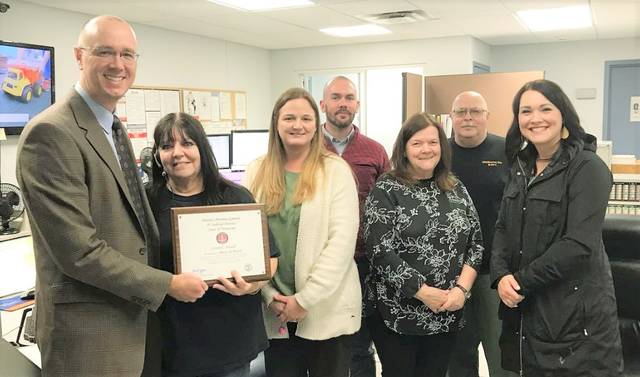 Veteran E-911 dispatcher Mary Jo Baird is celebrating 31 years as the voice on the other end of the phone line during emergencies inside the county. Baird was recently recognized by the Office of the 8th Judicial District. Shown from the left are attorney general Jared Effler, Baird, victim witness coordinator Sandy Hurley and assistant D.A. Matthew McClung. Continuing from left to right is Kathy Henard, administrative assistant for the Office of the 8th Judicial District, Roger Hager, executive director for Claiborne E-911 and assistant D.A. Carla Brewer.

For 31 years and counting, veteran dispatcher Mary Jo Baird continues to be the calm voice in the midst of chaos as she goes about her duties at Claiborne E-911. Baird says she “accidentally” fell into what has become a lifelong adventure at the switchboard.

“We closed our family roofing and sheet metal business in 1988, where I was the secretary and did payroll, and we all began looking for jobs. I went to the unemployment office to see if they had anything and was told that the Sheriff’s Department had a dispatcher position the previous week, but it had been filled.

“I went to there and filled out an application. George Malone was the Sheriff, at that time. They called me a couple weeks later and I went in for an interview, was hired and started working that afternoon. It took me about one hour to decide that I absolutely loved this job and that I was right where I needed to be. I’ve always heard that if you love what you do for a living, you will never work a day in your life – and, that’s the truth. There has never been a day that I dreaded going to work,” said Baird.

Each day, she says, is different. You never know what that next call is going to bring.

The last three decades have brought major technological advances to the E-911 business.

“There wasn’t even a map of the county at the time I started dispatching,” said Baird.

Spending so many years behind the switchboard has given the veteran dispatcher a plethora of sometimes humorous, sometimes tragic memories.

“There are so many calls that stand out in my mind that I could fill pages and never run out of stories. I have laughed. I have cried. I have felt pure relief when help arrives to someone in need.

“Helping deliver a baby over the phone was one of the happiest and most rewarding calls I have taken. Some calls are just unbelievable. I have always said that you cannot make this stuff up, and that is true,” said Baird.

Her career spans the terms of multiple sheriffs as she maintained the calm at the switchboard through the Malone years and two terms with former sheriff Bruce Seal before making a smooth transition to Claiborne E-911. The service was mandated by the state and the system approved by the Claiborne County Commission during the fall of 1992.

Its first and only director, Roger Hager, was asked to comment on the recent honor bestowed to Baird by the Office of Attorney General.

“Mary Jo is the best of the best. If we could clone Mary Jo, our life would be so much better. Mary Jo cares and she will do whatever it takes to help people (and animals). That’s what it takes to be a good 911 dispatcher.

“We’re blessed to have her in Claiborne county as one of our first ‘First Responders,’” said Hager.

Baird was presented with a plaque of appreciation for her decades of service to the county. In attendance were attorney general Jared Effler and members of the Office of the 8th Judicial District.

During the presentation, Effler commented on the excellence of service Baird has demonstrated all these many years.

“Our dispatchers are heroes behind the scenes and Mary Jo is a leader among them. Words can’t express how much I appreciate the work that Mary Jo and all of our dispatchers do on a daily basis to keep us safe,” said Effler.

As for Baird, there seems to be no plans to retire anytime soon.

“Helping people is something I love and hope to continue doing for several more years. No career path I could have chosen could possibly have been as rewarding as dispatching has been,” said Baird.