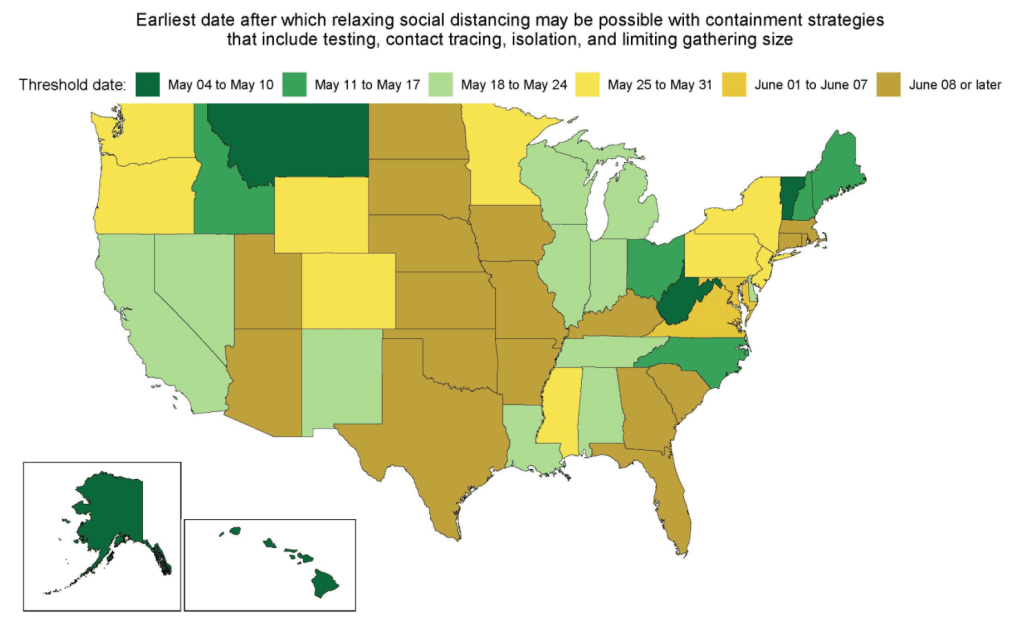 The map depicts COVID-19 thresholds, as suggested by the University of Washington Institute for Health Metrics & Evaluation. Tennessee, shown in pale green, is predicted to threshold between May18 and May 24. The threshold dates for Virginia and Kentucky are June 1-7 and June 8 or later, respectively.

Tennessee along with a handful of other states will be ushering many of their populace back to work by early May. The controversial ‘Safer at Home’ order from Tennessee Governor Bill Lee will expire on April 30 with no plans to extend the timeframe.

However, some reputable research centers would like to put the brakes on the rush back to work and socializing. The University of Washington Institute for Health Metrics & Evaluation has released its newest data suggesting that a better expiration date for Tennessee’s “Stay at Home” order would be May 20.

Both research centers base their projections on the likelihood that Tennessee will not see a drop in new cases for a bit longer. The centers best estimate for a safe return to work and play will require less than one prevalent COVID-19 case per million residents. The centers agree that easing up on all implemented measures at once would create a surge in new cases.

According to the U.S. Census Bureau, Tennessee has an estimated 6.829 million people within its borders. As of April 22, there were 3,688 active cases inside the state, according to the Tennessee Department of Health. The health department reported more than 6 percent, or 448 new cases, had been confirmed over and above those reported just the day before. As a reference, there was a 2 percent jump within the April 20-21 time span.

In its latest press release, the Institute for Health Metrics & Evaluation recommends that social distancing measures be eased “if and only if strong containment measures have been instituted.”

Federal guidelines include the testing of antibodies – at best, something currently in the experimental stages. Experts with the University of Tennessee and the Knox County Health Department agree that research on immune cell testing leaves many unanswered questions.

The Knox County Health Department warns against using the antibody tests as a diagnostic tool or for patient care.

The federal guidelines also call for a 14-day downward trajectory in cases where coronavirus is suspected.

The governor says his Economic Recovery Group is working with industry leaders around the clock so that some businesses may reopen as soon as April 27.

During a press conference on April 24, Lee said his plan for a safe economic recovery is supported by data showing that COVID-19 infections have hit a plateau. According to the governor, the average daily growth rate had remained stable for the previous 14 days with a steady downward trajectory since April 1 in positive tests.

COVID-19 testing has increased, with more tests continuing to be made available to the public, he said.

The recovery plan has officially begun with the reopening on April 27 of many dine- in services at restaurants, followed on April 29 with the opening of retail stores. Both entities are currently limited to 50 percent capacity, according to the plan.

“These businesses will open with specific guidance that we will provide in accordance with state and national experts in both medicine and business,” reads a quote by Lee, from the April 20 ‘Stay at Home’ order.

According to the Order, 89 of the 95 Tennessee counties will begin a phased reopening of the majority of businesses on May 1. Lee will work with Shelby, Madison, Davidson, Hamilton, Knox and Sullivan county governments, and their respective health departments, to plan strategies for those individual counties.

The Claiborne Progress posted Governor Lee’s Order on our Facebook page. A few comments and ‘likes’ suggested that the majority of our Page readers were in favor of going back to work on May 1.

“It’s about time,” said Ron Hall in his comment. “The governments’ reaction to the virus is completely unwarranted and we should never have been locked down in the first place…. (Many who have this virus) do not display symptoms or have such mild symptoms that they never bothered to seek medical attention, let alone be tested. It is time to not only reopen, but reopen without restrictions. Those who are worried or at higher risk can stay home, but for the 99.5% of us who have nothing to fear, it’s time to get on with life.”

Other comments were not quite so positive.

“Lord, help us all,” and “Death trap” were among the more negative comments.

The Claiborne Progress asked our readers what they would do to fill the extra time given them during the updated ‘Stay at Home’ time extension.

Sherry Billingsley said she would stay busy spring cleaning inside and repainting and pressure washing outside. Billingsley also commented that she is teaching her children to cook, clean and do laundry as well.

“When I need something, I will go out and get it,” said Mike Bradley, in his comment. “Got a deck project going and it will be finished as soon as I go to Lowes and get what I need to finish it. But, this order is not a one size fits all. We are not big city where people are shoulder to shoulder. We need to get back to work or small towns will dry up faster then what they already are.”

Melissa Widner Johnson said in her comment that nothing has changed in her home.

“I’m still working and my husband is disabled so he’s home as usual. The only thing that changed is, I have to do all the shopping (which I absolutely hate…lol) because he can’t be out during this.”

In his Order, governor Lee was quoted as saying that “social distancing works.

“As we open up our economy it will be more important than ever that we keep social distancing as lives and livelihoods depend on it.”

On Jan. 22, the first case of COVID-19 was reported in the United States. From that date to April 24, there had been 905,358 reported cases with 51,949 deaths. Over the past few days, the cumulative death toll in North America has grown by roughly 2,000 daily, according to the latest published statistics from Johns Hopkins.

The research center states on its website that “flattening the curve” means reducing the number of new cases from one day to the next.

For more from the Tennessee Department of Health, visit: www.tn.gov/health/cedep/ncov.