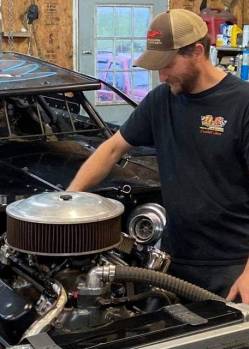 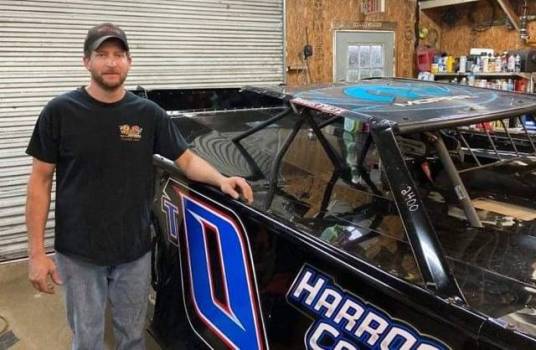 Travis Fultz could be the ultimate example of turning wrenches and chasing dreams. He found his love of racing early and it’s been a part of his life since.

The son of Ronald and Shirley Fultz got started in racing around the mid 1990’s as a crew chief for driver Reagan Debusk. Fultz later dove into the driving aspect in 2003 as he and Troy Eads combined Eads’ car with a Fultz motor and took turns driving. Fultz first car was an old street stock.

His parents had different views about their son racing, “My dad has never said anything either way about my racing but mom has said before she doesn’t like me racing just for the fact that I might get hurt.”

Fultz spoke of his goals in racing, “My immediate goal was of course to win and as for my 10 year plan for racing is to “boost” my winnings before I retire.”

He pilots a late model dirt car with the T0 on the side because he couldn’t decide on the number and ended up choosing the zero and putting the letter T beside it for his name.

Travis now pilots a 2017 Bloomquist chassis and the engine is from DJ’s Performance Race Engines. It’s a long way from the street stocks as far as technology and the people who helped him from start to current day has been a big part of his success.

Fultz talked about his help over the years, “Reagan Debusk and Troy Eads is how I began as his crew chief for a few years. I meet Troy through Reagan and I help him on his crew until we took turns driving in 2003.

Currently I have on my crew Cory “Buddha” Dake, Cody Williams, my wife Wendy, and whoever else shows up at the track.”

Fultz has many wins and championships to his credit, “I have four track Championships. Two were in Limited Late Models 2010 and 2011 at Tazewell Speedway and two in Sportsman Late models 2017 and one in 2018 driving for Wayne Overholt.”

Travis wants to thank a few for helping him get to this point in racing including Mike Reece at Reece Monuments, “He gave me the opportunities to really get my racing career started and of course my mom and dad.”

He credits his best time in racing as being his first win. Fultz came from sixth to the front and led the last two laps for the win and his worst moment was also at Tazewell Speedway flipping on his lid on the back stretch.

Fultz epitomizes the Turning Wrenches, Chasing Dreams series. He makes a living while also seeing and helping other racers live out their dreams but still finds time to enjoy some track time. He works hard and plays hard.

Like others in racing he is waiting the COVID-19 situation out and is looking forward to pulling the T0 car back to a local race track.