Three arrested on drug, other charges 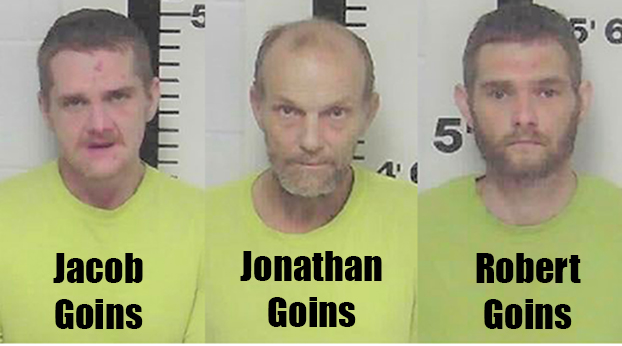 A lengthy investigation by detectives of the Claiborne County Sheriff’s Office has netted the arrest of three men charged with an assortment of illegal narcotics activity and other crimes.

The CCSO SWAT team descended upon a residence in Tazewell with search warrant in hand – the second such visit made to the Lillie Lane residence since January of this year.

Investigators with the Narcotics and Criminal Investigation Divisions located a variety of controlled substances, seizing approximately $2,000 in U.S. currency during the execution of the warrant.

Robert Adam Goins, 32, was arrested on an outstanding warrant for violation of the Sexual Offender Registry Act. He is currently out of jail on a $1,000 secured bond.

Jacob Aaron Goins, 35, was also arrested in connection with this case. He was charged with the sale and delivery of a schedule II, a schedule III and a schedule IV controlled substance. He is currently lodged inside the Claiborne County Jail on a $50,000 secured bond.