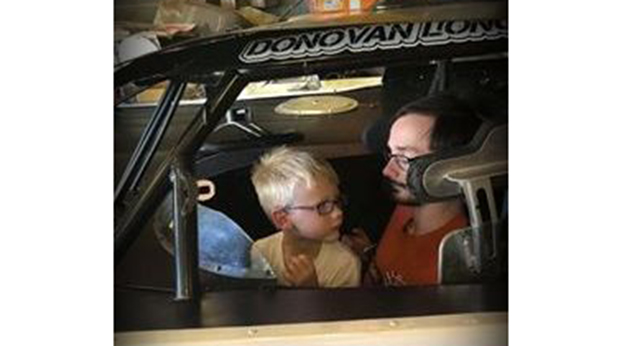 Donovan Long is the son of a racer. His father Jason Long is a name familiar to local race fans due to his successful racing career. Donovan’s mother is Beki Turner. He was raised in racing and now he’s enjoying the sport.

Donovan said, “Racing has pretty much ran in the family. My grandpa raced, my dad raced, my uncle raced. So it’s just been a part of my life.”

He just added to a list of wins by winning at Tazewell over the July 4 holiday making his total nine. Long also has one championship to his list of statistics.

His first car was a 2005 Mastersbuilt and he debuted on a regular race weekend in 2017. He finished 10th his first time out. He had great help starting out with his dad, uncle Bubba and cousin Colby.

“They were the main ones that helped me get started and on the track and they are still helping me today,” Long said.

Racers understand that help from sponsors is essential and he has great sponsors including Quality masonry, Graves Boy Logging, Hopson Racing and Fabrication, Lula Roe Laura Harville, and Motherly Love.

Long spoke about his best and worst moments, “My first win in a racecar was by far the best moment but my worst moment in racing was probably my wreck at Bulls Gap when the axle broke and I hit the wall in qualifying and broke my thumb.”

Long wanted to say a few things to those that help him, “I have to thank my dad and my mom for supporting me and helping me get to where I’m at. Bubba and Colby for helping us work on it when we need help and also all my sponsors that help us out and be able to have the things we need to win.”

When asked what advice he would give to younger racers or those just starting out he said, “Don’t ever give up. Just keep doing the best you can and have fun.”

He chose his number 15 because it was his father’s and he wanted to keep it as a tribute to him. Donovan Long is on his way to a great racing career by turning wrenches and chasing dreams.