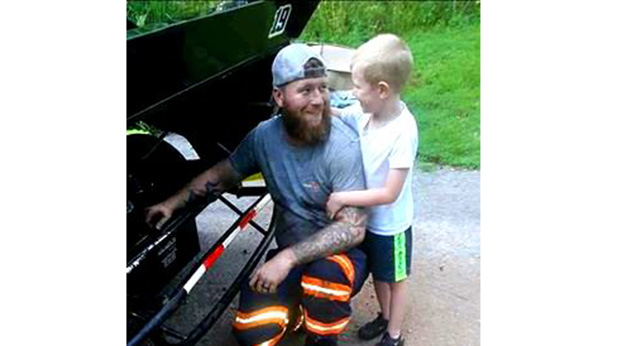 Chris Evans and his stepdad attended races when he was just a young wide eyed race fan but that love of racing and the deep down want to be a part of it urged him behind the wheel.

Chris is the son of Tammy Sue Overton and Billy Idol, not the singer. He is married to Serena Evans and they have three children Kelsey, Weston, & Memphis Jayde Evan’s.

Evans first got behind the wheel in a street class, Buick Regal with a number 44 on the side during the 2001 season and he finished in ninth place.

He had some good help from fellow racers Jesse Hoover, Bobby Moore and Chuck Thode but now his crew is made up by Josh Overton, Travis Cody & Josh Cody.

Evans has already seen the joy of victory lane as he grabbed his first win five years ago in the Classic Car division at 411 Speedway; however, his most recent win was a mere few weeks ago at the Taz.

When asked about what his good moments and bad were while racing he said, “The good is winning and the bad was when I got knocked out during a bad wreck.”

Still, Evans kept racing and has now racked up four wins to his credit but is waiting on that first championship.

Every racer has people to thank for supporting them and Evans is no different, “I’d Like to thank my wife for supporting me, my sponsors, & Joe Freels for building my race body and helping me set the car up.”

When asked about the advice he would give young drivers and fans wanting to try racing he said this, “Stay in school, keep your nose clean, always show good sportsmanship & run a clean race.”

His current number is one with a lot of meaning as his son picked it and that’s what we went with.

Chris Evans is a up and coming racer who doesn’t mind turning wrenches and chasing his dreams. With four wins down, he’ll start driving for five and perhaps that first championship.