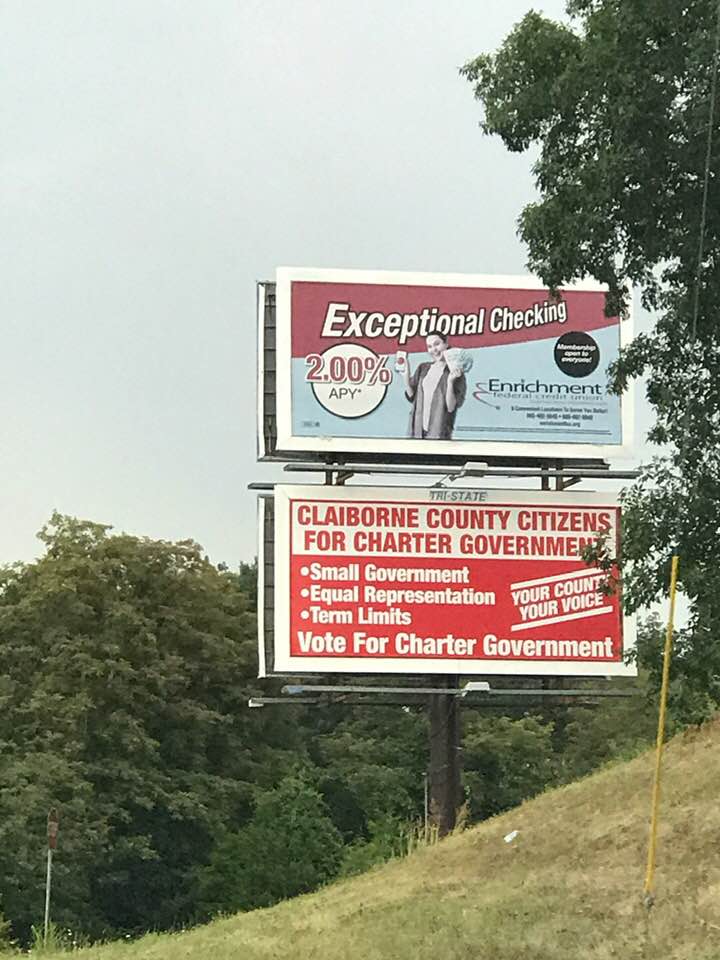 The Claiborne Commission spent a bit of time discussing the recent mailing of an ‘educational’ flyer issued in an attempt to highlight the main points of the Home Rule Charter.

Last month, the commissioners voted down a resolution that would have created a budget line item to allow up to $50,000 to be used for Charter Commission expenditures. The Tennessee Codes Annotated mandates this action.

Apparently the Charter commissioners decided to move ahead with mailing the flyers to all registered county voters.

Claiborne county mayor Joe Brooks explained the reasoning. Brooks said the county audit committee had met last month with Mark Treece, who is the audit manager for the Tennessee Comptroller.

Brooks said the audit committee was told the county would likely receive an unfavorable finding because the county had failed to set up the line item once the Charter Commission had been established.

As for the flyers, Brooks said the county will be liable for the cost via reimbursement.

Commissioner Zach Mullins opened the discussion by asking if the bill had been paid or a quote issued. He pointed to the bottom of the flyer which states that the costs were paid for by the taxpayers of Claiborne county.

Brooks said the Charter Commission had attempted to get a purchase order for the flyers. However, the Claiborne Finance Office denied the request because there was no line item from which to pull the funds and to reconcile the budget.

County attorney James Estep III agreed with Brooks that the purchase was legitimate.

“It’s entitled to be paid because it’s mandatory,” said Estep.

Some of the commissioners disagreed with the assessment that the flyer was educational in nature. Commissioner Sherry McCreary-Neal said she felt it was “slanted.”

The Mayor said the bullet points were based on changes in the way county government would handle certain situations moving forward.

Commissioner Carolyn Brooks asked about the pro-Charter government signs popping up over the county landscape.

“Who’s paying for all these signs,” said Brooks.

The mayor said the signs had been paid by a “separate pack.” He said the Election Commission was “fine with it” and that anyone could request more information about the pack via the Freedom of Information Act.

Audience member Wayne Lee asked about a particular sign along US 25E, inside the Tazewell city limits, locally known as motel hill. Lee asked who had paid for that sign.

“God paid for that,” said Brooks. “That was an in-kind donation from somebody who owns the billboard who asked if they could put something up. They were in support of the Charter and wanted to donate that space for advertisement for the Charter.”

He later added that the billboard had been previously used for Bible verses.

Commissioner James Hatmaker took exception to the mayor’s comment, saying he did not appreciate it.

Later in the discussion, commissioner Juanita Honeycutt asked to speak about one of the bullet points on the flyer.

“It says it does not alter or change any county zoning currently in effect. The Charter says ‘this charter shall not alter or change zoning regulations effective in the county but the same shall continue until modified by the board of county commissioners acting under authority granted within this charter,’” said Honeycutt.

She pointed out that there are no zoning regulations in Claiborne county outside those contained to subdivisions, which go through the county Planning Commission.

“If this is educational, why does it only say half of the statement? If you’re going to make half a statement, make a whole statement so that people get the full picture. You can’t educate people with half a sentence,” said Honeycutt.

She said she had received several calls about a video the county mayor had put out. She took exception to one portion of the video in which the mayor explained how county government adopts ordinances.

Honeycutt asked how many ordinances are adopted by the commission. She said that, in the video, the mayor had said the commission can pass ordinances with one reading while the proposed Charter government would need to hold three readings in order to adopt an ordinance.

“We don’t have the authority to do an ordinance. Only the two charter governments in Tennessee – and that’s Shelby and Knox counties – can do ordinances,” said Honeycutt.

The county attorney agreed that currently, only a private act can initiate the eventual adoption of an ordinance.

Mayor Brooks reminded the commissioners of the attempt some three years ago to create a trash ordinance. He said the commission could have changed it with just one reading.

“That charter does three reads on that thing with at least one week in between each of those reads. So, if anything, it makes it harder to enact zoning in Claiborne county than the way that it currently is. Right now, you could have brought that up and with one read tonight, and had zoning in place,” said Brooks.

Near the end of the discussion, commissioner Charlton Vass asked whether the $50,000 in Charter expenses would affect the county’s credit ratings.

Commission chairman Mike Campbell said he wanted to make it clear about the vote last month.

“This county commission voted not to put that (the Charter Commission expenditures) in the line item – the $50,000 expenses,” said Campbell.

Claiborne county registered voters will be going to the polls on Aug. 6 to decide by referendum whether they want a Charter form of government.

Deadline is July 31 to apply for emergency loans…