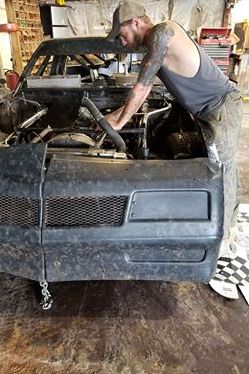 Bradley Bean is a racer that is just starting his career. He comes from a line of racers including his late father Bobby Bean.

As most drivers will tell you, starting is the hardest part. Bradley has just began racing but has been a lover of speed since he learned to walk.

Bean is the son of Bobby and Sherry Bean but says Tammy Eads is like a mother to him as well. Bean spoke about what got him into racing, “It’s not what got me into racing because I was born into it. I can’t remember a life without Tazewell Speedway.”

Bean has a Daughter Maelie Bean and his girlfriend is Caitlynn Treece and they help him out on his Chevrolet Monte Carlo, his very first race car.

Weeks ago, Bean got his first taste of racing and he admits he’s got the fever, “My first race was around a month ago and I am hooked for life.”

Starting the sport has its ups and downs. Bean found that out the first time out, “During my first race the car had a few problems and I ended up having to pull in due to overheating the engine.”

He has great help in place around him and their knowledge of the sport is priceless, “Troy Eads is a major contributor to helping me get started. Every time I need something or even just advice he is there.”

With only weeks of racing in his background Bean has had some memorable moments and one he’d rather forget, “My best moment in racing so far was getting to pass Zach Campbell driving the #26 dodge truck even though I hit the wall in the next turn and got a right rear flat and had to pull in.

The worst thing so far is when my steering quickener came loose and I lost my steering; now that was a scary feeling.”

Starting out fresh is extremely tough but Bean has a great attitude, “I am still chasing that first win, working harder and harder to get there each week. I’d like to thank all of my friends and family for supporting me and pushing me to do better.”

He has a special thank you to Caitlynn and his daughter, “Thanks so much for spending so many long hours in the garage asking me questions and wanting to help so much.”

As a learning driver he knows to rely on advice from other drivers. Bean said this about advice, “I am still learning myself but I try to listen to the drivers and mechanics that have been there and done that. It’s too expensive to not live and learn when people like Johnathon Miracle are kind enough to give advice, take it.”

Bean races the number 77 in Street Stock and he explained why it’s important to him, “The number 77 was my dad’s number and I built the car in memory of him so that’s why I run it.  Being in that car on the same race track he raced at is an amazing feeling and he was my hero so I want everyone to remember him through me.”

Young or old, experienced racer or not those first few races are magical and Bradley plans to do this for a long time and in memory of his dad.