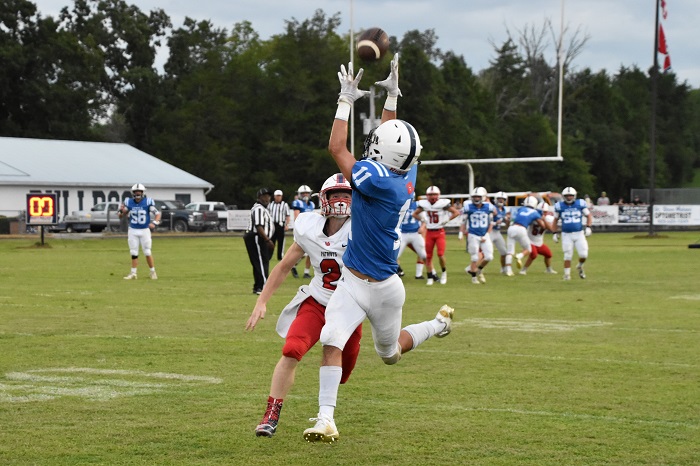 After their first game being labeled as a no contest due to inclement weather last Friday, the Claiborne Bulldogs football team opened their season up against rival to the south Union County, August 28.

The weather was threatening with tropical system remnants coming through the area. Fans were in place, the teams were in place and once again, it was football time at Claiborne High.

CHS had a fun night as they scored three times rushing, twice through the air and even added a defensive TD on a scoop and score.

The Bulldogs struck first on a Eli Stone pass to Storm Livesay. Stone then kicked in the extra point, 7-0.

The CHS defense was stingy behind the play of Will Fugate and Livesay among others. After forcing a punt Jimmy Del Ervin rushed four yards for another TD; however, the extra point was missed and the Dogs led 13-0.

Soon after, Stone found Challen Massengill through the air with a beautiful 49 yard TD and and Ervin completed the two point conversion, 21-0.

The defense was still playing great and when the offense got the ball back Stone found Isaac Lester and this pass went 36 for another touch. This time the extra point try failed and the score was 27-0 at the half.

During halftime Haydn Hollin returned to the field for a ceremony honoring his play during 2019 and his All State Selection. Hollin was presented his jersey which will be hung in the school. The Blue Battalion sounded great during the halftime performance.

At the start of the third, Claiborne seemed to let up somewhat but Ervin broke loose for a 54 yard rushing TD and Livesay completed the conversion extending the lead to 35-0.

Although the offense slowed down for the Bulldogs, the defense stayed active and Josh Bolton had a fumble recovery, scoop and score in the fourth quarter and led 41-0 after a missed point after try.

Union County finally got on the board late with a 33 yard pass but the conversion failed and the game ended 41-6 with Bulldog’s fans rejoicing in the stands.

CHS Head Coach Nathan Medlin was asked to grade his team after the game and his reply was, “They showed some good things and we let up in the second half. I think if I had to give them a grade overall it would be a B. We had some kids fill in for the five we had out and did a good job stepping up.”

The Bulldogs will hit the road September 7 to battle conference foe West Greene.