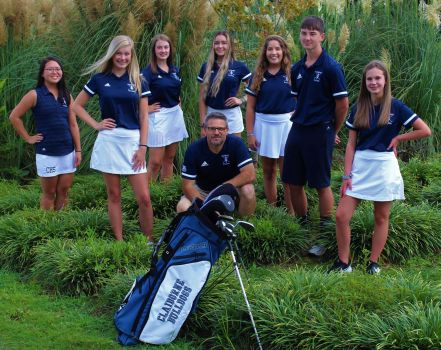 Shockley and Holt began with Coach Scott Payne in middle school and have ended up enjoying success at the high school level.

The team traveled to Greeneville’s Link Hills Country Club to participate at the district championship and came away with the trophy. It was a tough season to get scheduled due to the pandemic but when it got underway the Lady Bulldogs won every meet but one; however, they took the battle to that team a few weeks later and got revenge leaving them with a solid record of 9-1.

Coach Payne talked about his team and how difficult the season was to even get started, “When we got the go ahead to start the season it was a struggle to find teams to play. I would call and email them and my calls wouldn’t get returned and the emails didn’t get answered at times too. Finally we got some teams scheduled to play and we had a great season.”

Payne continued, “We had high expectations this year. We told them it was their year because we seen them work hard and we knew they could do it if they played hard enough. During the district meet, the team started slow but calmed down by the third hole, played normally and won by 14 strokes.”

Payne watched as the individual competition came down to two athletes, “Cayden Walker from the Gap and Shockley went at it. Whoever won the last two holes would win the individual. Walker had a better finish and Shockley took second.”

Alvie Poore advanced as an individual for the boys regional competition and he has had a steady season and is capable of a strong finish at regional, “Poore can place a strong finish because he knows he has had strong rounds this season behind him and he is only a sophomore but has a great shot at a strong finish. He has some strong competition but for him and the girls team, I’m really excited to see what happens.”

The regional tournament is scheduled to start Thursday.