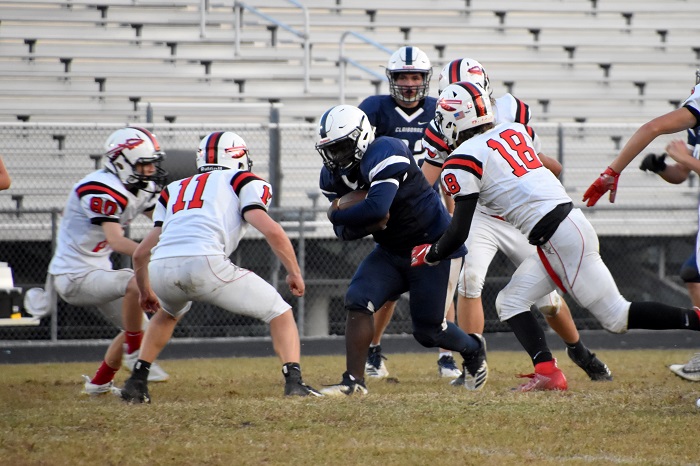 The Bulldogs junior varsity team welcomed the Cherokee Chiefs into Claiborne County for another game of football where tomorrow’s high school starters were on display.

The JV teams had somewhat of a difficult time scheduling due to pandemic issues but there were a few games that allowed the underclassmen some very important playing time.

When the game began, it was Cherokee that was finding success on offense but both teams had numerous turnovers. The Chiefs were on a drive that ended in a touchdown on the first play of the second quarter. After they pounded the two point conversion into the end zone Cherokee led 8-0.

The Bulldogs offense wasn’t getting on track and they were faced with a fourth and short but a fumble gave Cherokee the ball deep in Bulldogs territory.

However, two plays later the Chiefs completed a pass into the end zone for their second touchdown of the night. The two point try failed but the Bulldogs were behind 14-0.

The Bulldogs were on offense again when the game took a somber turn when Freshman Korbin Hatfield collided with two Chiefs across the middle and went down hard.

There was an apparent injury to his leg and he was taken from the field to the emergency room for further evaluation. It was later determined Hatfield had suffered a broken leg.

The Dawgs continued their drive but it stalled near the 35 yard line. The first half clock ticked down and the home team found themselves behind 14-0.

Claiborne had a great drive going that took up most of the third quarter but it didn’t end in a touchdown.

The Chiefs took possession of the ball deep in their own territory and two plays later found points again. After a penalty on the first conversion try they fumbled leaving the score at 20-0.

Claiborne then tried attacking through the air and the throw on second down found a Chief instead of a Bulldog and they set up their offense on the Dawgs side of the field as the third quarter wrapped up.

Starting the final quarter, Cherokee had the ball on the Bulldogs 12.

The Chiefs scored on a quarterback keeper to the pylon and put the game away for all purposes. The two point conversion failed but the damage was done at 26-0. The visitors added one more score making it 32-0.

In the end, CHS had proven they could move the ball but needed to focus more on ball security; however, most fans were concerned less with football and more with Hatfield’s well being and offered prayers and positive thoughts.

Breaking down: Bulldogs versus Panthers