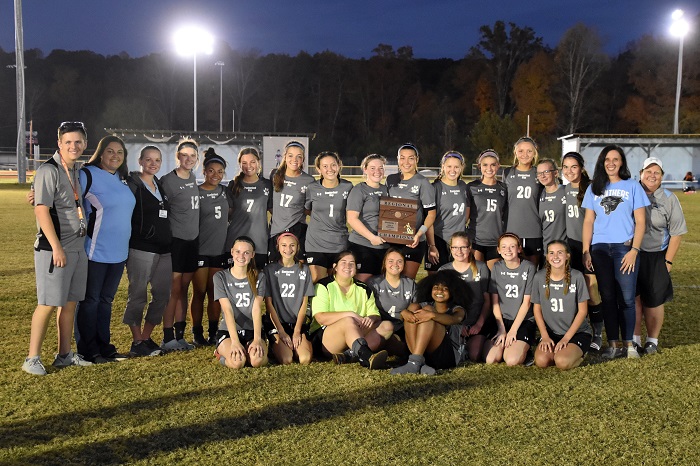 The hottest sports team in Claiborne County cruised through the regular season, district tournament and the regional tournament and remained unblemished.

The Cumberland Gap Lady Panthers soccer team won the district and regional championships and then took care of their sectional opponent to reach the state tournament in Murfreesboro, Tennessee.

They left with a blue light escort and arrived with one thing on their mind; win and advance.

Their opponent was Merrol Hyde Magnet school and they had recent state tournament experience losing to Alcoa last year 1-0.

It was Cumberland Gap’s first ever state tournament and the nerves and butterflies had to be intense as the first kick started the game.

Aly Ramsey kicked in the Lady Panthers first goal but it was unfortunately sandwiched between two Merrol Hyde goals.

Cumberland Gap found themselves down at the half 2-1. It wasn’t something they were used to and the Lady Panthers’ fan base were anxious to see how they would play in the second half.

Unfortunately, the Lady Panthers magic ran out in the second half. They played hard but ended up losing 5-1.

Still, Cumberland Gap has nothing to be ashamed of as they were the first girls team to make it that far and by doing so captured the respect and love of the community.

Coach Lorri Kimbrough spoke about the team and the game, “We played hard the whole game. They were a talented physical team. We had the speed advantage in the back but the midfield was too physical for us. I’m very proud of their effort.”

Kimbrough added, “They have shed some tears but I think they are good. One thing to note: Aly Ramsey scored a goal today so she has scored at least one goal in every game this season.”

The Lady Panthers will return home with an outstanding 16-1 record and the admiration of Claiborne County.

The 2020 Cumberland Gap girl’s soccer team will now be the one all others are compared to.