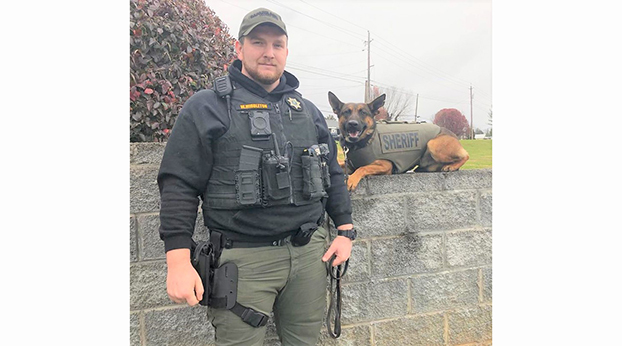 CCSO K9 Major models his protective vest donated by the nonprofit organization Vested Interest. His partner, Winston Middleton, says the vest is something he has wanted for Major since the beginning.

It seems the most natural of things for man and dog to bond, sharing respect and love for one another. That is no more evident than in law enforcement, where dogs partner with their humans to protect society from all manner of lawlessness.

Along the way, the unit becomes one, fighting crime while looking out for one another.

A much-needed layer of protection was recently granted Claiborne Sheriff’s Office K9 deputy Major when his partner strapped a donated bullet and stab vest onto his faithful sidekick.

“I tried to get a vest for him since the beginning. I don’t want to lose my dog.

“The armor is not cheap. This way, the Sheriff’s Office is not out one dime and Major is protected,” said Middleton.

The K9 unit has worked together since February, learning about each other while putting in an extensive three months of arduous training. Major, who is about two and a half years old, will be a part of the CCSO scene until his retirement, which will fall sometime between the age of six and eight years of age.

Middleton says he hopes to keep Major, once the K9 retires.

“It’s an awesome experience. It’s what I signed up for. I enjoy it but it is a lot of hard work.

“You go into it trusting your partner and knowing he’s got your back,” said Middleton.

Each time Major straps on his armor, he carries into the field the embroidered sentiment “honoring those who served and sacrificed.”

Vested Interest in K9s, Inc. was established in 2009 with a mission to provide bullet and stab protective vests and other assistance to four-legged K9 officers serving across the country.

The armor is U.S. made, custom-fitted and NIJ certified. It weighs approximately four to five pounds and comes with a 5 year warranty.

Since opening its doors, the nonprofit has provided over 4,101 vests to K9s in all 50 states, spending some $6.9 million made possible by private and corporate donations.

The program is open to all service dogs that are at least 20 months of age and actively employed and certified with U.S. law enforcement or related agencies. Those with expired vests are also eligible.

Vested Interest accepts tax-deductible contributions in any amount. A single donation of $960 will sponsor one vest. Each one has a value of $1,744 to $2,283.

There is approximately 30,000 law enforcement K9s across the United States.

Give the gift of Tennessee history this Christmas