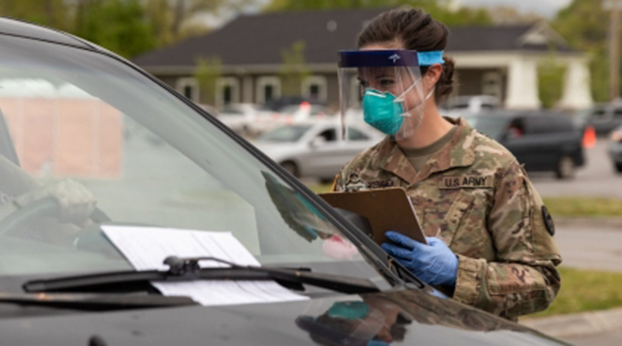 gt. Leann Roggensack, a field artilleryman with the 278th Armored Cavalry Regiment, works as a registered nurse in her civilian occupation. She is one of many Tennessee Guardsmen who have volunteered to help test Tennessee residents for COVID-19. - Photo by Sgt. Sarah Kirby

The National Guard celebrates its 384th birthday on Dec. 13, 2020. This date is etched on the cornerstone of our Nation as it represents the first moment our society took its defense into our own hands. It was also the first step in building a nation out of an untamed and dangerous wilderness. This date signifies the moment the Massachusetts Bay Colony organized three militia regiments to defend the colony from the growing threat of American Indian attacks. Other American colonies would follow their example and the militia would later become the basis for the Continental Army. The organized militia has since become the oldest military branch and the only military force required by our constitution.

Tennessee’s National Guard was born on Aug. 17, 1774, when Capt. Evan Shelby organized the first known mobilization of the militia in the self-governing Watauga settlement – territory that became Tennessee’s present day Sullivan and Carter counties. Shelby’s militia company began a volunteer tradition Tennesseans have embodied in every war in United States’ history. Whether fighting with John Sevier at Kings Mountain; defeating the British at New Orleans with Maj. Gen. Andrew Jackson; rallying to President James K. Polk’s call for volunteers for the Mexican-American War; or taking up arms with the 30th Division in World War I and II; the Tennessee National Guard has always been there when our communities, State and Nation needed us.

Our forefather’s devotion to duty and extreme volunteerism earned Tennessee the nickname “The Volunteer State.” This spirit is exemplified in the words penned by Maj. Gen. Andrew Jackson to Pvt. David Crockett, Lt. Sam Houston, and 5,000 other militiamen as they mobilized for the War of 1812: “Brave Tennesseans! We must hasten to the frontier, or we will find it drenched in the blood of our fellow-citizens!”

Currently, the Tennessee National Guard has more than 12,000 Soldiers and Airmen standing ready to answer our Nation’s call to protect our fellow citizens. Stationed throughout our State at bases and armories in nearly every county, we are a well-trained and trusted force ready to respond wherever or whenever called by the governor. What sets us apart from other military branches is that we are citizens of the State we swore to protect. We work and live here. Our families live here. We don’t just protect and help our community; we are our community. When disaster strikes, we are ready.

During this past year, our volunteer commitment has proudly lived up to its legacy within Tennessee’s borders. The men and women of the Tennessee National Guard and State Guard have responded to help our citizens at historic levels. Since March, hundreds of Soldiers, Airmen, and state guardsmen have been in our communities serving on the frontlines of the first of two tornado responses followed closely by the COVID-19 response. They tested over 680,000 Tennesseans for COVID-19 and are still out there today testing our fellow citizens. They allowed the expansion of testing for our citizens across the State at high-risk areas, collected and distributed critical Personal Protective Equipment to first responders, and delivered much-needed COVID-19 tests at the start of the pandemic by ground and air.

Simultaneously to the pandemic response, we brought calm and security to civil disturbances across the State. In less than 72 hours, we responded to our Nation’s call to assist with civil unrest in Washington, D.C., deploying twice the number of Soldiers and Airmen than any other state while utilizing our own aircraft. We helped maintain security during presidential debates and the election and we continually provided support to the National Park Service with numerous rescues of injured hikers and hunters.

The Tennessee National Guard continues to deploy around the globe to areas like the Middle East, Kosovo, and the Pacific. Since Sept. 11, 2001, we have deployed thousands of guardsmen, ranking us 4th in the Nation of deployed Soldiers and Airmen in a state that ranks 16th in National Guard size. We have met every challenge, answered every call, and performed every mission. We are dedicated to upholding the honorable linage established by our forefathers 384 years ago.

As we celebrate the National Guard’s 384th birthday, please take a moment to reflect on the courage and patriotism of those who came before us and consider the legacy we leave behind. Now and forever, let us be remembered as the “The Volunteer State.”