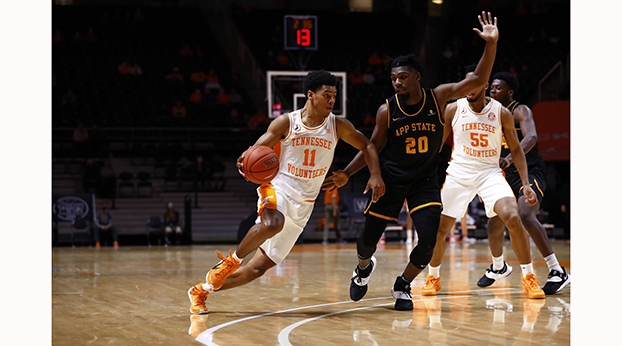 Four double-digit scorers and a suffocating defensive effort led the 10th-ranked Tennessee basketball team to a dominant, 79-38, victory over Appalachian State on Tuesday inside Thompson-Boling Arena.

The Mountaineers’ (4-2) 38 points were the fewest points a Tennessee team has allowed during the tenure of sixth-year head coach Rick Barnes.

On the boards, the Vols (3-0) were dominant for the second consecutive game, winning the rebound margin, 45-27.

Sophomore Josiah-Jordan James posted season-highs in both points (11) and rebounds (8), with five of his boards coming on the offensive glass. He also knocked down all three of his attempts from 3-point range.

Freshman Jaden Springer came off the bench to score 12 points on a highly efficient night from the field, knocking down six of his eight attempts.

Senior John Fulkerson was the most complete Vol on the night, tallying 12 points on 6-of-9 shooting, with five rebounds, three steals and a pair of blocks.

Tennessee came storming out of the gates, opening the game with an 18-4 run. During that stretch, the Vols held App State without a field goal for the contest’s first seven-plus minutes while also forcing four turnovers.

The Big Orange continued to pour it on as the half progressed, holding the Mountaineers to just four made field goals also while spreading the wealth on offense. Eight of nine Vols who saw first-half action penned their names on the score sheet as UT took a 36-13 lead into the halftime break.

Appalachian State’s 13 first-half points were the fewest given up in a half by the Vols since Nov. 6, 2018. On that date, UT held Division II Lenoir-Rhyne to 11 points in the second half and walked away with an 86-41 victory.

Tennessee maintained control throughout the second half, shooting .464 from the field as a team and maintaining its stifling effort on the defensive side of the floor to walk away with the 41-point win.

Take it Back: Through three games, Tennessee has forced 58 total turnovers for an average of 19.3 forced turnovers per game.

Defense… Just Defense: Through three games, the Vols are allowing just 47.0 points per game and have yet to yield 60+ points to an opponent.

Up Next: The Vols–in the midst of four games in nine days–return to Thompson-Boling Arena for a Friday night clash with in-state foe Tennessee Tech. Tipoff is slated for 7 p.m. ET on SEC Network+.