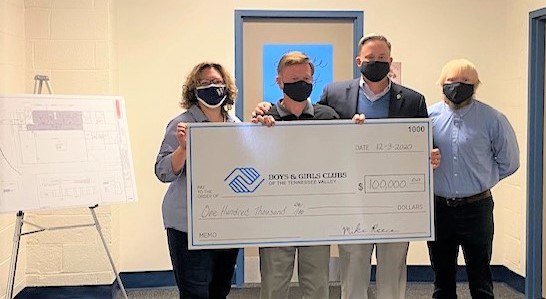 Local businessman Mike Reece presents a $100,000 check to those spearheading the effort to establish the Boys & Girls Clubs of Claiborne County. From the left are Kim Bolton, Mike Reece, Rob Barger and Alan Reece. (courtesy photo)

Rural counties also have latchkey kids – those who find themselves with few positive endeavors to occupy their time while parents work.

The task to bring a Boys & Girls Club to the county is moving toward its completion date, with a tentative opening pegged for sometime near the end of 2021. The six-plus years it took to bring the organization chapter to fruition is time well-spent, according to those who just want to see kids grow in mind, body and spirit.

In 1860, three Hartford, Connecticut women decided to organize a place that would give kids an alternative to roaming the streets while their parents worked at the mills. Initially called the Dashaway Club, the after-school program offered a plethora of recreational activities to entice the young folk away from the danger that could be found on the mill town streets.

Similar programs began to spring up in Rhode Island and Massachusetts. In 1876, railroad magnate E. H. Harriman coined the name that would eventually stand. His Boy’s Club of New York focused on kids in the rough and tumble lower east side of the city.

Girls were gravitating to the program by the 1950s in such numbers that a separate Girls Club was formed. In 1990, the two organizations officially combined under one umbrella, becoming known as the Boys & Girls Clubs of America.

The Claiborne County chapter is well underway, with construction expected to begin early next year. Extensive renovations will be done to a wing located behind the auditorium at Walters State Community College – Tazewell campus.

Project funds were generated from an ARC (Appalachian Regional Commission) grant along with donations from area businesses and individuals. A big push for start-up funding came on Dec. 3 when local businessman Mike Reece donated $100,000 to the cause.

Kim Bolton, who is one of the original five who began the effort, spoke about the project.

“There was a group that met several years ago, and started talking about a Boys and Girls Club. Out of that five people – myself, Rob Barger, Sheila Cosby, Dennis Cook and Sherry McCreary – took the idea and kind of worked on it for years,” said Bolton.

Through a series of events, the group was able to be accepted through the TN Valley Boys & Girls Clubs.

“In order for us to be considered under their umbrella, the community stepped up and started to support the project which was something they needed to see,” said Bolton.

She says that, after such a long process, she is “so excited” to see the proverbial light at the end of the tunnel.

“It’s exciting to think that something you worked on for so long is actually going to come to be. I can’t wait to see the actual construction happen. And, then to see the kids in the building – it’s going to be absolutely awesome.”

Project updates can be found on the Facebook page for the Boys & Girls Clubs of Claiborne County.