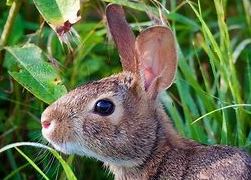 The Eastern Cottontail is widely spread over the United States and Tennessee is blessed with a strong population of the grayish brown and white furry mammal.

The rabbit features a brown tail that lifts up and shows white when it runs. It has long ears, long back legs and can run very swiftly and often very erratic helping it to escape predators.

Typically it is less than 20 inches long, and has a weight of two to three pounds.

It likes open areas to feed and grown up areas, fence rows and tree edges to hide in.

The male is called a buck and the female is called a doe. Before mating, there is a chase involved and the doe will eventually turn and face the buck. A little bit of night time sparring with their front legs occurs and then they crouch down while facing each other until one of them jumps up into the air several times before the mating act happens.

Females can have up to seven litters a year. The litter sometimes consists of as many as 12 but usually average around five young with pregnancy lasting 26-28 days.

There are two more rabbit species found in Tennessee: the Swamp Rabbit and the Appalachian Cottontail.

Rabbits are hunted as food and their fur. Usually beagles are used but are not necessary and the season usually begins early November and runs through February the following year. The daily bag limit is currently set at five.

Kim Bailey spoke about how to utilize the meat in recipes, “You can substitute it out with many recipes. I make it in the crock pot using a Mississippi Roast recipe and served over mashed potatoes but any recipe will work.”

Fred Chumley also gave advice on how to cook, “Rabbit or quail in my opinion is the best of small game. Always thought boiling removed too much of the flavor unless making dumplings. Best way for me is to cut up the rabbit and soak overnight in buttermilk then fry it up and make gravy off your rabbit. Add Bisquit and you’re set.”

Rabbit fur is used in the fashion industry as trim on coats and in hat making.

The Eastern Cottontail is one of the most underutilized small game animals available for hunters in Tennessee.