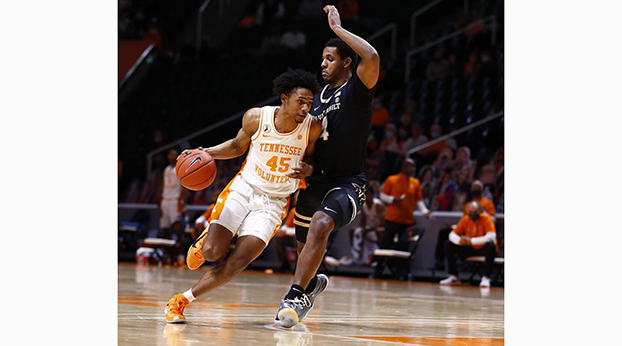 The win was the Volunteers’ (10-1, 4-1 SEC) seventh consecutive victory over the Commodores (4-6, 0-4 SEC), and their fourth in a row inside Thompson-Boling Arena.

Johnson’s 16 points were both a team- and season-high, coming on 4-of-8 shooting from the field and a near perfect 7-of-8 mark from the free-throw line.

Senior John Fulkerson was among the most efficient players on the floor Saturday, scoring 15 points, knocking down five of his six attempts from the field and grabbing a game-high eight rebounds.

Victor Bailey Jr. finished the night with 11 points, nine of which came on three made 3-pointers during the Vols’ early second-half run that stretched the UT lead.

The first half was a tightly contested affair that saw the defenses controlling the flow. While the squads combined to shoot a fairly efficient 37 percent from the field, there were only 10 combined offensive rebounds and seven second-chance points between the sides.

A late push to end the opening half sent the Vols into the locker room with a 34-24 lead.

The start of the second half saw a similar pace to the contest’s opening frame, before the Vols broke things open with a 15-2 run during a four-minute stretch where they knocked down five shots from 3-point range, three of which came from Bailey Jr., to extend the lead to 56-42.

Over the contest’s final 10 minutes, the Vols stifled Vandy on the defensive end and made a number of key buckets to close out the night.

Defense Wins Games: The Vols forced 16 turnovers and nabbed nine steals as a team. Saturday’s 16 forced turnovers marked the 10th time in 11 games the Vols have forced 15 or more turnovers.