Panthers JV gets win at CHS 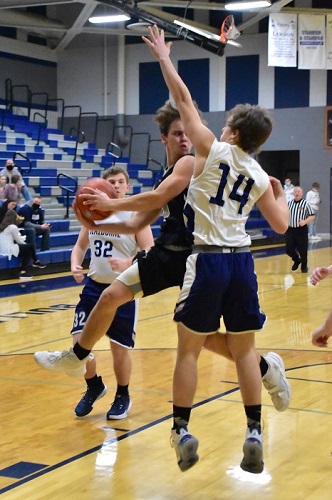 Hinckley led the Gap in scoring.

The Cumberland Gap basketball team looks to be in great shape for the next few years as the junior varsity Panthers put their talents in display when they defeated Claiborne, January 19.

The night featured only the two boys teams as pandemic tracing took its toll on both girls teams.

The Panthers took an early lead and cruised in route to a comfortable victory at 46-31.

Cumberland Gap led after the first period and went on to lead at the half 24-15.

During the third period, Claiborne needed to play great defense and turn it into points.

However, the Bulldogs managed to drop in only three points and gave up seven.

Claiborne started hitting shots in the final period and dropped 13 points but it wasn’t enough and the Panthers enjoyed the win over their rival.

Hyrum Hinckley led the Gap with 14, Kaleb Powers had 10, Alex Douglas and Dillion Green both had six. Ethan Powell had four and Isaiah Gerrells along with Richie Logan and Braden Ellison had two points.

Claiborne was led by Evan Thomas with eight. Four others had five points each including Cooper Sams, Conner Atkins, Brennan Fugate and Lane Bunch. Stephen Thomas rounded out the scoring with three.