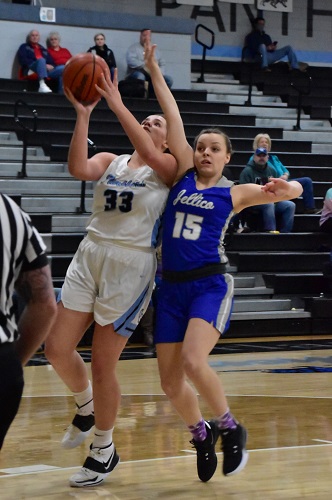 Nevaeh Kerns got her Lady Panthers started quickly as she worked hard in the paint. Between her points and the scoring of Abigail Garner and Abbie Fultz, the Gap enjoyed a 9-5 opening period.

Fultz found the basket three more times during the second and Brynlee Foster added five points. Kylie Fultz added four and Emrey Glover hit one of two from the line.

Presley Cole made her mark in the third by scoring nine and Garner dropped in eight. The Fultz twins added four more, Jaden Brock swished a three and Glover scored four.

During the final period the clock ran non stop and Kerry Dixon dropped in her first points of the night and helped the Lady Panthers secure a big win at 60-21.

Leading the Lady Panthers in scoring was Abbie Fultz with 11. Garner had 10, Presley Cole had nine, Brynlee Foster had eight, Glover finished with seven, Kylie Fultz had six, Kerns had four, Brock had three and Dixon had two rounding out the total.

The coaching staff of the Lady Panthers seemed pleased with the way the team shot the ball and played defense.