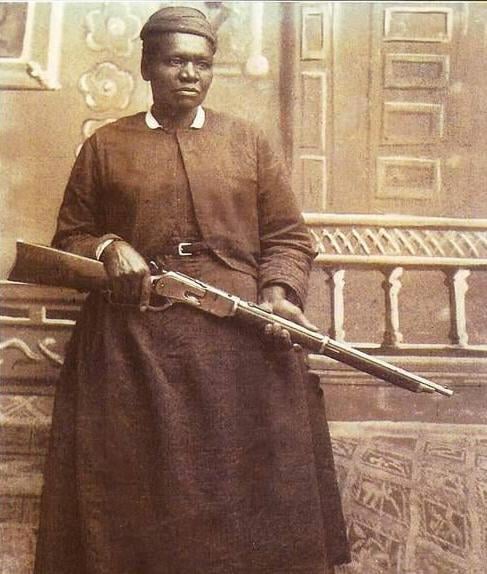 “I wear pants. I smoke a big black cigar. I drink whiskey. I carry a pistol. I like to smoke and drink in bars with the men. I travel the country, driving a stagecoach, delivering the mail to distant towns. Nobody tells me what to do. Nobody tells me where to go. I like to be rough and rowdy. I also like to be loving and caring. I like being me.” – Mary Fields.

Stagecoach Mary Fields may have thumbed her nose at every single convention of the time, but few would dare voice complaints about her lifestyle. The gun-packing, beer drinking, cigar-smoking, oath-swearing rowdy former slave earned her right to follow the course she chose.

Her formidable physical attributes most likely added to the reticence of pioneer men who gave Mary a wide berth. Standing 6 feet tall and weighing well over 200 pounds, Mary was quite capable of swiftly putting down an opponent when arguments turned to fisticuffs.

Born into slavery in central Tennessee during the administration of President Andrew Jackson, Mary headed west sometime after the Civil War to make a living in Montana with the Ursuline Nuns at St. Peter’s Mission. She was hired to haul freight and supplies and to perform heavy work that included wood chopping, stone work and rough carpentry – most anything needed at the frontier mission.

The following is an account recorded from BlackCowboys.com detailing a shoot-out reportedly occurring between Mary and a fellow mission employee:

“Once a ‘hired hand’ at the mission confronted her (Mary) with the complaint that she was earning $2 a month more than he was ($9 vs. $7), and why did she think that she was worth so much money anyway, being only an uppity colored woman? (His name, phonetically, was Yu Lum Duck). To make matters worse, he made this same complaint and general description in public at one of the local saloons where Mary was a regular customer, and followed that up with a more polite version directly to Bishop Filbus N.E. Berwanger himself (to no avail).

“This was more than enough to boil Mary’s blood, and at the very next opportunity the two of them were engaged in a shoot-out, because when Mary went to simply shoot the man as he cleaned out the latrine – figuring to dump his body in there – she missed. He shot back and the fracas was on).

“Bullets flew in every direction until the six-guns were empty, and blood was spilt. Neither actually hit the other by direct fire, but one bullet shot by Mary bounced off the stone wall of the nunnery and hit the forlorn man in the left buttock, which completely ruined his new $1.85 trousers. Not only that, but other bullets Mary fired passed through the laundry of the bishop, which was hanging on the line, generously ventilating his drawers and the two white shirts he had had shipped from Boston only the week before. What his laundry was doing at the nunnery is not clear.

“That was enough for the bishop; he fired Mary, and gave the injured man a raise,” reads the account, in part.

After a short stint as a restaurant owner, the enterprise failed. Mary was reportedly a lousy cook and could not bring herself to turn away hungry people who could not pay. She decided in 1895 to try out as a U.S. Mail carrier – becoming the second female and first African-American to land the job. She was hired because she could hitch six horses faster than any of the other male applicants.

She soon earned the name Stagecoach Mary for her ability to quickly move mail – much of it, of great importance to the development of the Montana Territory. Her dedication and reliability during difficult and dangerous routes earned her the respect of her fellow carriers and the public alike.

Mary continued for 8 hard years to deliver mail through wilting heat, drenching rains and sub-zero blizzards, spanning much of her 60s when most would have been rocking away their days near a roaring fire.

At the age of 70, Mary retired and opened a laundry. The following account of an incident, reported on the Black Cowboys website, details an incident that occurred when Mary heard one of her customers outside a saloon:

“One lout failed to pay his bill to her however (he had ordered extra starch in the cuffs and collar). Hearing him out in the street, she left the saloon and knocked him flat with one blow – at the age of 72. She told her wobbly drinking companions that the satisfaction she got from that act was worth more than the bill owed, so the score was settled. As luck would have it, the tooth of his that she knocked out was giving him trouble anyway, so there was no reprisal. Actually, he was grateful,” reads the report.

Mary lived a good portion of her life in the town of Cascade, Montana, where she was well-respected as a special member of the community. Schools closed in honor of her birthday. Although women of the time were barred from entering a saloon, Mary was given special permission by the mayor to enter any time she took a fancy.

Mary died of liver failure on Dec. 5, 1914 in her beloved Cascade. She was approximately 82 years old.