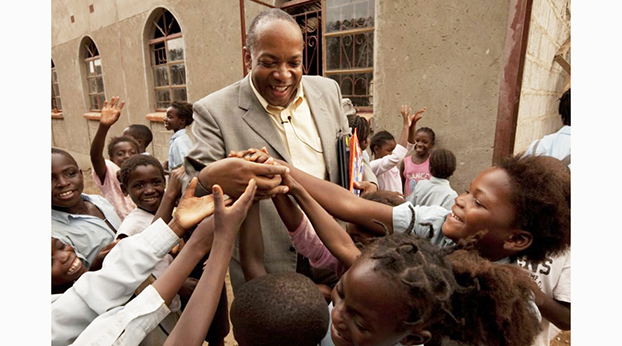 The International Mission Board celebrates the ongoing and indelible legacy of African Americans who have served and are serving on the mission field.

“Only God’s redeeming love and the reconciling power of the Gospel could result not only in repentance from that but in a convention of churches today, that is among the most diverse in the world and whose membership includes thousands of African American churches, as well as many other ethnicities,” Chitwood said.

“That diversity from such a regretful beginning is not only humbling, but it causes us to celebrate what God is doing through Southern Baptists today with even more joy to think that He would use us.”

Here are just a few of many stories of African American brothers and sisters who have served with the IMB.

One little-known aspect of Foreign Mission Board (now IMB) history is that some of the very first missionaries were African Americans – free men and women already living in Liberia who were appointed to serve as Southern Baptist missionaries.

Southern Baptists’ first African American missionary, John Day, was appointed to Liberia. He was a free man already living in that country who started churches and discipled believers while working within the government to help establish Liberia as a nation.

As an African American and the first Southern Baptist missionary appointed to Africa, Day was uniquely gifted for the task. He wrote of his service there and his calling, “Let me but be in the path of duty, with the promises of God to sustain me and I can hope against hope and persevere, though mountains of difficulty oppose me. God is omnipotent, and he who is promised is faithful.”

On Feb. 6, 1859, when he stepped to the pulpit to begin a sermon, weakness overcame him, and he could not speak. He was taken home to rest and died Feb. 15. His preaching on earth was over, but his influence in Africa, specifically Liberia, was just beginning.

Mary Sue Thompson served with the FMB from 1967 to 1979. There were African American missionaries who served between Day and Thompson, but it had been more than 80 years since the FMB had appointed any African Americans for career missionary service.

Thompson, a teacher, wanted to teach in Nigeria and build a ministry that would support FMB’s missionary work in Africa.

FMB’s executive leader Baker James Cauthen told her at her appointment service: “We have waited for you a long time. We are glad you are going because of who you are, of what you represent, of what is in your heart. Let me give you a commission: Go to Nigeria, as Paul said, as ‘a letter written on our hearts,’ a love letter from us to them.”

“Nigerians, other Africans and people around the world have asked me, ‘Why don’t Southern Baptists have more Black missionaries?’” she said.

Yvette Aarons was born Deaf, but she never doubted God’s call to foreign missions, even after the FMB refused to send her.

A native of Jamaica and a naturalized U.S. citizen, Aarons first applied to the FMB in 1985. Her request for consideration was denied because she was “handicapped.” Two years later, the board voted to eliminate Deafness as a handicap that precluded people from foreign mission service. Yvette didn’t hesitate to reapply.

Yvette arrived in Trinidad in March 1990 with the FMB’s International Service Corps. She was the first Deaf person sent by the FMB.

Yvette was appointed in 1993 as a church associate developer for the Deaf in Trinidad. Throughout the 1990s, Yvette served in Trinidad, St. Vincent, Grenada and St. Lucia. She transferred to Thailand in 2002, where she worked with Deaf across Southeast Asia, specifically among street vendors in Bangkok and with large Deaf populations in Djakarta (Jakarta), Indonesia.

At the time of her initial appointment to Trinidad in 1990, Yvette said, “I am simply delighted to reach other people of like language and experiences. The Deaf world is a small world, and I already feel a bond with the Deaf people of Trinidad.

“Being Deaf is a great asset. The bridge is already built because of my Deafness. I just need to cross it and reach the Deaf people of Trinidad for Jesus.”

Because of Yvette’s willingness to obey the call of God on her life, many Deaf people from all tribes, peoples and languages will one day join in worship before the throne.

Troy and Tracey Lewis held the hands of Zambian men, women and children dying from AIDS and talked to them about life after death.

An AIDS diagnosis was a death sentence for many people in Zambia, but the development of antiretroviral therapy gave thousands of patients new hope. The Lewises tirelessly worked with clinics, non-governmental organizations, Baptist churches and ministries to stock the medicine in clinics across Zambia.

Troy and Tracey equipped churches to respond to the HIV/AIDS crisis in a Christ-like manner through Expanded Church Response, an organization Troy helped found, and which he served as executive director and trustee.

By the end of 2012, Expanded Church Response staff and the Lewises had trained more than 3,000 caregivers who were tasked with caring for bedridden patients. The Lewises trained ECR staff to serve communities by providing AIDS testing, disaster relief, hunger relief and training in financial planning. They prepared churches to care, encourage and be present with people who are suffering — to give them hope in Jesus.

VIDEO
Vols look forward to Saturday’s challenge at No. 4 Alabama

VIDEO: Did you know? – Venomous snakes