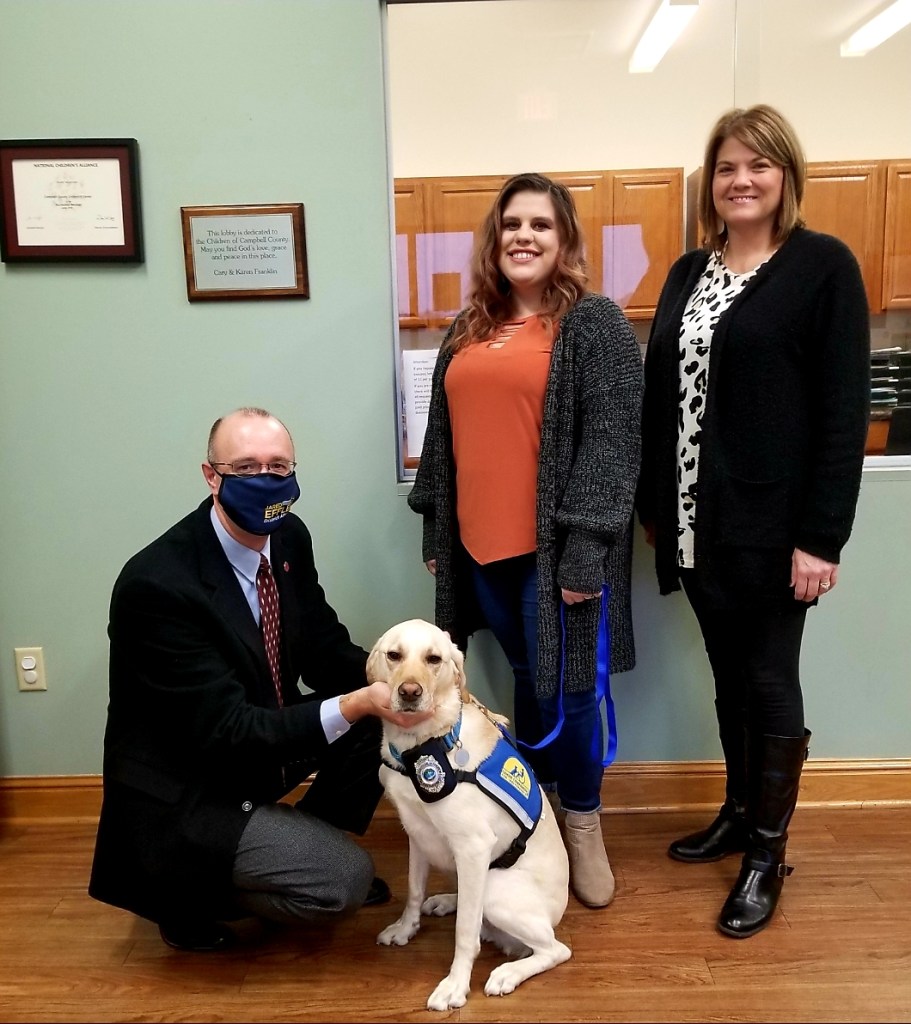 Orville the facility dog pauses in his important work to receive his official badge during a ceremony held on Feb. 1. In attendance are Jared Effler, attorney general for the 8th Judicial District, forensic interviewer MacKenzie Adkins and Tracie Davis, executive director of the Campbell County Children’s Center. (submitted photo)

Orville the therapy dog seems to be taking his new badge in stride. Since coming to the Claiborne Children’s Alliance, the mixed Labrador has proven a calming influence in what would otherwise be chaos in a young child’s life.

In the short time since October, Orville has become a fast friend to abused and neglected children and an outstanding partner to those working alongside the gentle canine.

His chief role is to help reduce the stress and anxiety child victims feel during the investigation, which begins with the forensic interview leading to the eventual prosecution of each case.

“The purpose of a forensic interview is to lessen the trauma of child abuse victims by minimizing the redundant interviewing process in a child friendly environment, such as our Children’s Center,” said Melissa Cain, administrative assistant for the Campbell County Children’s Center. “Sometimes, interviews are able to be played in court and entered as evidence. However, in other situations the child is required to testify.”

Forensic interviewer MacKenzie Adkins, who works closely with Orville, spoke during an earlier interview about the facility dog.

“Children often get very emotional during the forensic interview. I have to stay as unbiased as possible on camera, but Orville will be able to offer comfort and support to these children as they tell about their traumatic experiences.

“There are times when I, as the forensic interviewer, am able to testify on behalf of the child. But, there are also times when the children will confront their abuser on the witness stand. Orville will be right beside them in those instances. He can give them courage to tell their horrifying story and help bring justice that these children deserve.”

Tracie Davis, executive director of the Campbell County Children’s Center, said during an earlier interview that she is a firm believer of the therapy dog program.

“A lot of times, children will feel more comfortable with an animal and they will talk to an animal when they are uncomfortable talking to a person.

“We had one child that was very hesitant – did not want to go (into the interview) at all and didn’t really even like animals. (The child) walked right back to the interview room with him. I think children know and they sense. He is very loving and calm and child-friendly.”

Another plus to having Orville there, Davis says, is his constant presence with the child when the interviewer might have to do a quick step-away.

The official badge-pinning ceremony was held on Feb. 1 with Adkins, Davis and District Attorney General Jared Effler in attendance.

Effler spoke during the ceremony about how important Orville is to the program.

“Orville allows members of the Children’s Centers and District Attorney General’s Office to better serve victims of child abuse and neglect. He is an essential member of our team and it’s only fitting that he has his own, personalized badge.

“We look forward to working alongside Orville and our Children’s Centers as we continue to serve the children of our district.”