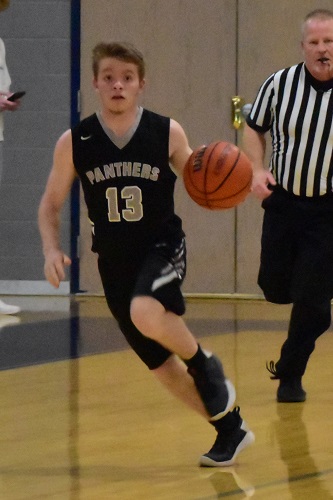 Douglas hit a near half court shot as the time expired to help the Panthers junior varsity get a big win over Claiborne, 41-38.

This one was awesome from the opening period as both teams dropped in eight points.

Hyrum Hinckley had five points helping the Panthers to get going and the three ball was falling for Claiborne off the shooting strokes of Conner Atkins and Brennan Fugate.

During the second period, Cumberland Gap used a 10-4 advantage from six different Panthers to pull ahead. At the half the Panthers led by six at 18-12.

Claiborne only had Brady Hamlin with a three and Josh Bolton scoring during the second period.

After the halftime break, Cumberland Gap shot better than Claiborne and dropped in 11 points while Claiborne had lost more ground by only scoring eight.

Claiborne turned the tables in the final period and scored 18 and the Panthers managed 12. Claiborne had the lead with around five seconds left and Alex Douglas became legendary when he crossed half court and drained a three that gave his team a thrilling victory, 41-38.

Leading the Panthers in scoring was Hinckley with 11, Richie Logan had eight, Douglas had six along with Dillion Green. Kaleb Powers had three, Braden Ellison and Andy Osborne had two and Isaiah Gerrells, Isaac Brown and Ethan Powell each dropped in a single point.

Leading Claiborne was Tommy Hicks with 16 all in the final half. Fugate had eight, Atkins had six, Cooper Sams and Brady Hamlin had three each. Jake Smith and Josh Bolton finished with one point each.