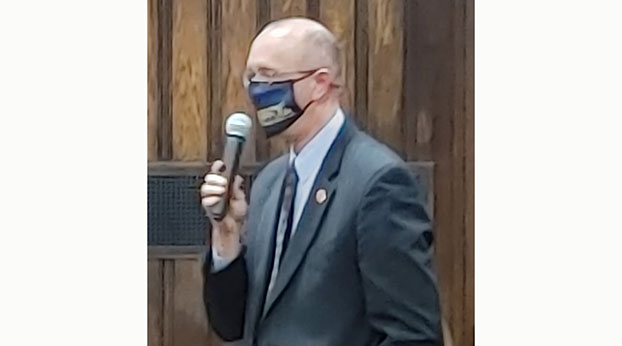 A technical error in the filing of a lawsuit against several drug manufacturers has thrown a temporary wrench into attorney general Jared Effler’s successful conclusion of a 2017 case. Apparently, district attorneys cannot legally position themselves as the plaintiffs in these types of litigation.

The Tennessee Supreme Court mandates that Effler must instead represent the county as its attorney.

To that end, the Claiborne Commission unanimously voted in favor to retain Effler for all big pharma lawsuits.

The district attorney general took some time prior to the vote to discuss the controversial case and its ramifications for our area.

“This is an east Tennessee problem. This is a fight we’ve been fighting since 2017. A fight I want to continue,” said Effler, framing it as a drug epidemic.

The Circuit Court did not agree, saying in its findings that the lawsuit did not apply to big pharma.

However, the Court of Appeals unanimously overturned the Circuit Court ruling, prompting the drug manufacturers named in the suit to appeal the case to the Tennessee Supreme Court. The Appeals Court ruling was upheld, with the Supreme Court finding that the lawsuit did apply to big pharma and should be used as such.

Effler said during the meeting that fallout has resulted in at least two drug manufacturers filing for bankruptcy.

County attorney James Estep agreed that Effler should continue on with litigation against the drug companies, saying that everything is in place to set the next trial.

Effler said the Tennessee Supreme Court should be back up and running by April, referring to the temporary halt in trials through March due to COVID-19.

The County Commission introduced Resolution 2021-007 into the agenda, promptly voting to retain Effler to represent the county in the drug manufacturing case.

A portion of the resolution follows:

“Claiborne County, as well as other counties in Tennessee and in surrounding states, has experienced an epidemic related to the distribution and use of opioids by its citizens that has generated critical issues and problems for Claiborne County, included but not limited to opioid addiction by Claiborne County citizens, drug overdose deaths, the birth of drug dependent babies, a rise in criminal charges, convictions for the illegal sale and use of opioids as well as other crimes resulting from the opioid abuse epidemic, including but not limited to burglary, theft, and fraud, and the loss of productivity of the citizens in the workplace, damage and destruction to the family unit, all resulting from the illegal sale, distribution and use of opioids in Claiborne County.”

The resolution states that the county fully supports and approves the actions taken so far and approves the lawsuit going forward by Effler and the law firm Branstetter, Stranch & Jennings.

The case is currently pending in Campbell County Circuit Court.

The attorney general initially brought the suit to recover money for the county under the Tennessee Liability Drug Dealer Act.