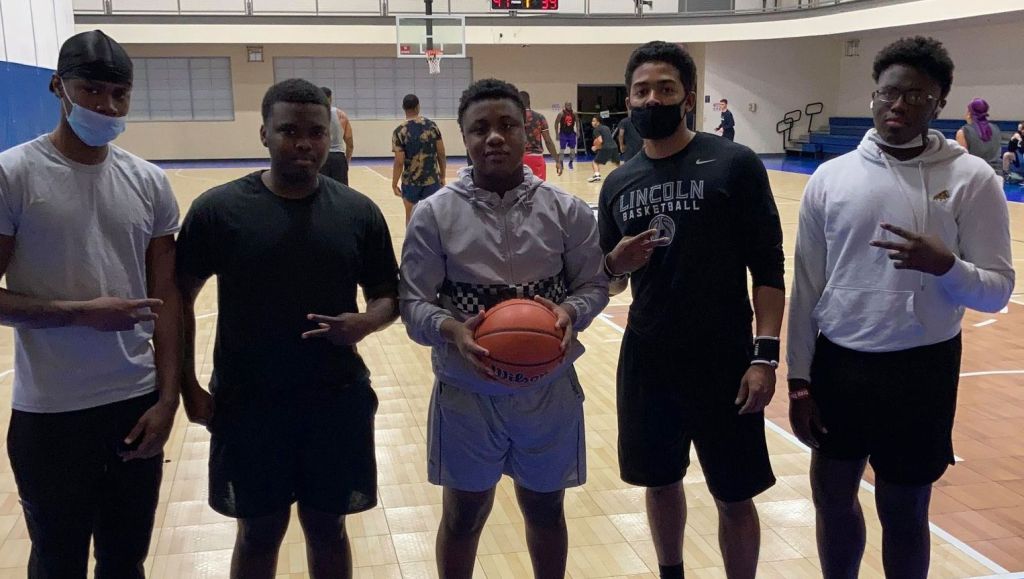 Photo Left to right. K.J., Jay, De’angelo, Tim Pierce then Jamar. K.J already graduated. The other three are at Captain Shreve high school. They are all cousins. Missing from the photo was Greg. Photo courtesy of Pierce

When an athlete comes into to Harrogate, Tennessee to become a Railsplitter, he or she not only commits to a program but a new lifestyle.

Athletes watch their nutrition, get as much studying done all the while doing necessary practice, weight training plus the actual competition itself.

Along with all that comes community service. Some colleges mandate social interaction and community programs but Lincoln Memorial University athletes seem to excel at it even after sports. From the RoHo Fishing Tournament benefiting kids to local sports camps the athletes begin to see the importance of giving back.

One such former athlete is Timothy Pierce. He was a sharp shooter on the LMU men’s basketball team and had his senior season in 2015-16. Pierce was a fan favorite, well mannered and soft spoken.

Pierce recently had the opportunity to continue his community service in a small but important manner. He witnessed several local high school players at SrA Fitness Center in Louisiana practicing their game with a slick, worn out basketball. Buying them a new basketball was only a small gesture but one he needed to do.

Some of those friends played high school basketball while others played football and others even played in the band. It was just a group of young people coming together for the love of the game.

Pierce presented the players the ball because it reminded him of time spent with all his friends. He spoke about the tiny gesture, “I did it out of the love of the game. It’s something that helped me throughout life and will continue to do so for these young guys as well. No matter the sport or whatever they decide to do in life. I wasn’t expecting anything in return because that’s not how I was raised. I’m just glad that I was blessed enough to bless them.”

The basketball represents a simple gesture with the potential to change a life or to solidify friendships for a lifetime.

Pierce is just one of many former LMU Alumni that chooses to give back to their community post basketball.

Photo Left to right. K.J., Jay, De’angelo, Tim Pierce then Jamar. K.J already graduated. The other three are at Captain Shreve high school. They are all cousins. Missing from the photo was Greg.

Panthers catch Knights and win by 23