Black History Month: Dayton Parkey, a man for a season 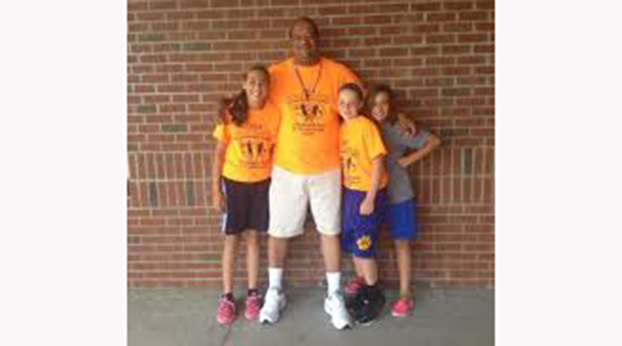 Dayton Parkey stands with some of his Soldiers Memorial Middle School (SMMS) students. He was a teacher, guidance counselor and faculty member of the Special Education Department during his time at the school.

Only the good die young. At 53 years of age, beloved Claiborne County coach Dayton Parkey traded this world for the next one. Never one to mince words, the coach was vocal about his feelings, both good and bad.

He had charisma, a quick wit and a sure love for the teams that came up under his guiding hand. He always found time for his middle school students, who followed the upbeat Parkey around like chicks with their mama hen.

If you ever wanted a word with Parkey, all you had to do was find a group of kids laughing and talking excitedly. He would be right there in the midst of the fun.

Parkey was a four-year letter winner in basketball while studying at Tennessee Wesleyan College, where he graduated in 1983. He went on to earn his masters in 2005 from LMU, garnering a degree in Education Administration and Supervision. He returned to the university in 2008, earning his Education Specialist Degree,

Within the annals of county sports history is the Parkey Dream Team, the 2000-01 girls’ basketball team who earned championships in the 2 AA and the Substate, among other titles. The team went on to earn a berth in the TSSAA State Tournament as well.

They went 27-0 in the regular season and were ranked number one in the AA Classification. This team ended up losing only twice – once in the Regional Championship and in the state tournament, according to sports writer Allen Earl.

In April of 2020, Earl filed a story about Parkey and his Dream Team in which some of the players recalled their coach.

“He was tough but man did I learn to appreciate that. At the end of that season I think we all learned he knew basketball and he loved it and loved us. That’s why he pushed us so hard,” said Jennifer Pressnell Hall.

“Coach Parkey could see the potential in each and every one of us and pushed us until it came out. I can still hear him in my head some days ‘don’t stop Gibson’ and I’m better for it.”

Natasha Riggs Smith said the coach “never settled for less than the best.”

Katasha Brown Flat said in the sports article that “a shift happened” when Parkey took the head coaching position.

“It became a different mindset within the team. The program was down and had multiple coaching changes in previous years. That first season, I think the seniors had a different coach every year and no one really expected us to win. I distinctly remember Parkey coming into the locker room after a win at home and he was upset because they were playing the National Anthem after our game, but before the boys’ game as if to say ‘OK, now the real game is starting.’ He took that personally and so did we. He expected us to win when no one else did and I think that changed the culture in the program and led to the success we started to see and ultimately a state championship run.”

Parkey was proud of his heritage. He spoke in a story filed in February of 1998 about his mother Willa Mae and how she worked two and three jobs to provide for her family. How she encouraged her children, above all, to get a good education.

Willa Mae was one of scores of young Claiborne County Black women who could gain a secondary education only by taking that long, arduous bus ride every weekday across Clinch Mountain to Morristown to the “Black” high school.

Parkey spoke of how blessed he felt to have been raised in the more sheltered county during the time when segregation was on its last leg.

“I grew up playing with black and white friends all my life. I never distinguished between the races. I was fortunate to have a lot of older folks around me and, unlike a lot of the kids coming up today, who have no concept about life before 1964, I was able to learn from the older folks about the time before desegregation.

Parkey credited Pearl Goins, who was the first Black teacher in the county, as his role model.

“I remember as a child, just seeing Pearl in the hallways meant a lot to me.”

He spoke of the numerous men in the Black community who willingly went off to war.

“I see people like Bill Cloud. Bill was in World War II. He served with the mayor of Chicago. Bill is really sharp.

“Men like that were never really given the chance to use their talents and brains. I see kids these days who have that chance and who are taking it for granted. They don’t realize the price that was paid for them to be at this school. Or, even to walk in and eat at McDonald’s.”

Despite all, Parkey was optimistic about the future.