Above and beyond the call; giving a fresh start 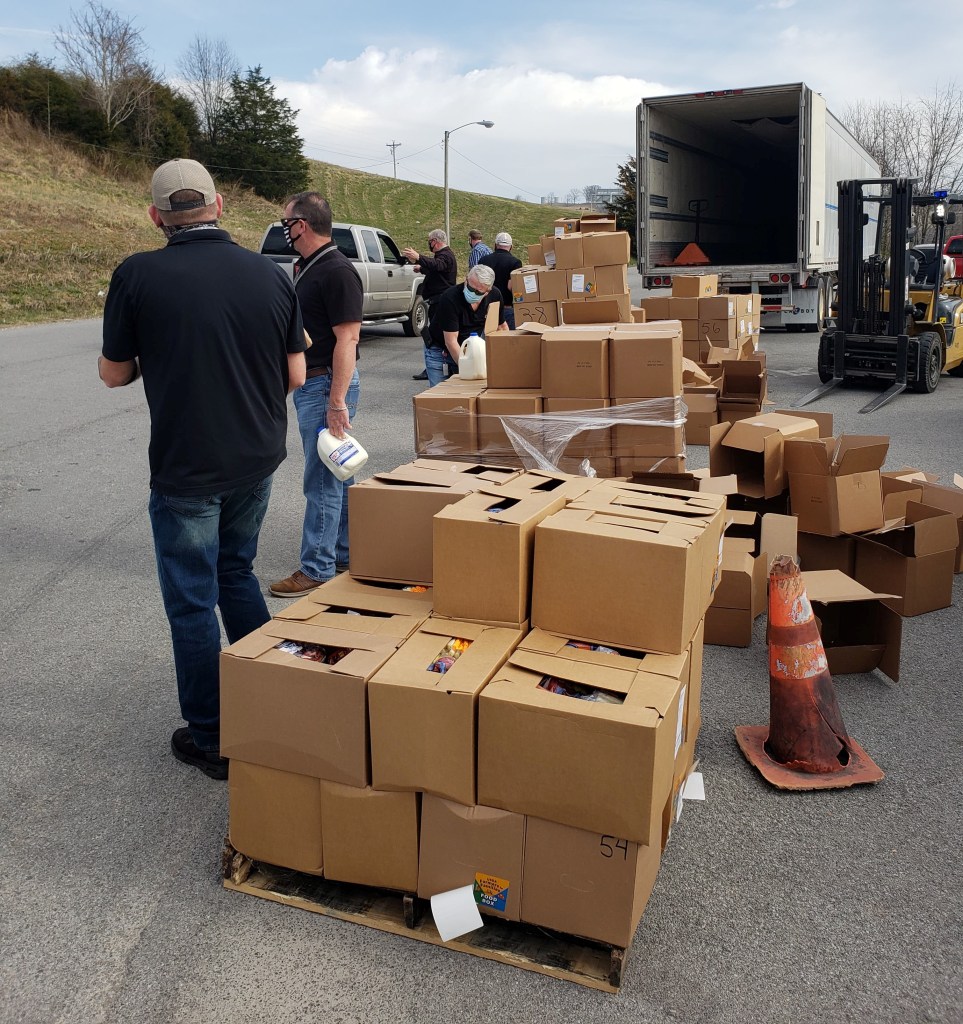 Volunteers load boxes filled with food donated by Appalachian Promise Fresh Start prior to a drop-off by Englands Mfg.

It would have been understandable if Sherri Hoskins had thrown in the towel nearly 20 years ago when her only child was killed by a drunk driver. Instead, Hoskins vowed to do all she could to prevent others from suffering the loss of a loved one.

She got busy, taking up the banner as an advocate for MADD (Mothers Against Drunk Driving). She used her pain to educate those who would thoughtlessly seat themselves behind the wheel of a vehicle after tipping more than a few alcoholic beverages.

She went on to transform the lives of scores of individuals through her advocacy. Today, Hoskins uses nearly every hour of the 24/7 cycle to help those caught in addiction through the nonprofit organization Appalachian Promise Fresh Start, of whom she is president and CEO.

“I don’t badger them night after night. I just get them help in a facility. I don’t even attempt to place people within the county where they get  their drugs. Why? You cannot heal where you wallow. You have to change your latitude, attitude and friends to make it,” said Hoskins. “We are blessed here but – and I say ‘but’ – we have to get the drug addicts  who are addicted out of the area  and into a long term rehab or it is useless. That is why we send our people in need of rehab out of state or far away. Rehab, healing and starting a new life is the best decision that can happen. Their best interest is not to return to where the addiction began.”

Long days and nights are spent searching for beds in rehabilitation centers and personally transporting those addicted, oftentimes through the night.

“Our office pays for this,” said Hoskins.  “Some stay. A few do not. This is the only way out for them. The catch is no warrants, and this is not a ‘get out of jail free card.’

“We have to make a change for them or it is useless and they have to want it. When people become addicted, a different avenue has to be taken and they cannot stay in the region the addiction takes place.”

“A few have graduated and are living elsewhere with jobs. It is always sad to see people leave the county, but to see them doing well is worth it all. I attend all graduations.

“I am proud of each person who has a new life and a chance at happiness. I would not change any of this process. It is at times exhausting. It takes away from any home life, but it is what I chose to do to give back,” said Hoskins.

The pandemic has brought with it a whole new set of concerns. Individuals have found themselves laid off or losing their jobs altogether, putting a strain on basics like food for the family table.

Hoskins saw another way to give back through multiple food distributions. Among those was a drop of 3,900 boxes of food within a two-week period to Claiborne Feed.

The distribution schedule includes an arduous food truck run on April 1 over the mountain to the isolated folk living in Clairfield.

Shortages of PPE (personal protective equipment) were met with multiple distributions of the vital equipment to area First Responders and medical offices in the counties of Bell (KY) and Claiborne, Jefferson, Hamblin and Hancock in Tennessee.

Hoskins’ brainchild, The Fresh Start Program, has proven a success in Claiborne and surrounding counties. The pilot program caught the eye of Tennessee Governor Bill Lee, who became a strong proponent of its guidelines.

Hoskins spoke in a previous interview about losing her daughter to a drunk driver and why she decided to create the program.

“He (the drunk driver) had been released just 4 hours and 12 minutes before he killed my child. I asked myself why jails are constantly full – many who are repeat offenders. I looked at the statistics.

The concept was presented to Claiborne Sheriff Bob Brooks and local manufacturer Anthony Mountain, who jumped onboard as enthusiastic cheerleaders. Brooks gave his thumbs up while Mountain quickly agreed to allow the first group of 12 male inmates to work at Homesteader, Inc.

The men’s salaries went to paying court costs, fines, probation fees, restitution and child support – things that might never have been paid off if left to circumstances.

Another portion went to rectifying any unpaid bills, causing credit standings to improve so that loans could be secured for necessities.

The remainder of the paychecks went directly into an “untouchable” savings account that would eventually pay living costs like rent and utilities once released from jail.

As each man completed the program, looking forward to their release date, a new batch was ushered into the program.

The pilot program has since been enlarged to encompass adjacent counties in Tennessee and Kentucky.

Hoskins was recognized for her massive contributions to the betterment of Claiborne and surrounding counties with the presentation last year of the Tennessee Volunteer Star Award.

Meanwhile, the petite powerhouse continues to make a sea change in the lives of those struggling with alcohol and drug abuse. Hoskins was recently nominated for the Claiborne Progress’ Unsung Heroes campaign. Wanting to remain anonymous, the reader explained her reason for the nomination.

“This lady paid to put our child in rehab. She drove her below Nashville after midnight when no one would help in town. No one! (My daughter) is alive and doing well.

“(Hoskins) never closes her doors. She is Claiborne County’s heart. My child was dying and (Hoskins) never blinked, never questioned. She showed up and drove Casey and paid (the rehab bills). She is our hope and help.”

The Claiborne office of Appalachian Promise Fresh Start offers rehabilitation services only. The offices located in the surrounding counties serves The Fresh Start and Nutritional Food Programs. The Kentucky office will be offering the Fresh Start Programs for men and women.