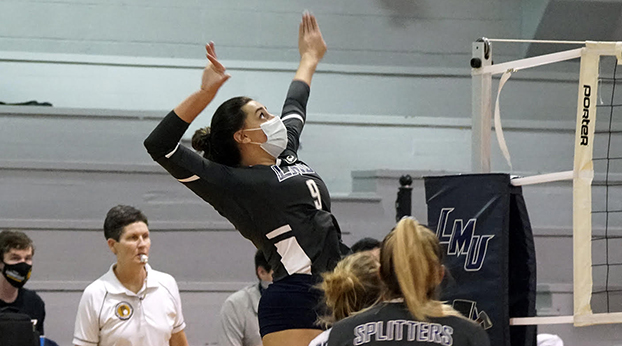 In the midst of a lengthy four-match road swing, the Lincoln Memorial University women’s volleyball team claimed its second win of the unique 2020-21 season by outlasting Mars Hill University in a five-set thriller Friday night inside Stanford Arena. The Lady Railsplitters (2-3, 2-3 SAC) took a two-set lead on the host Lions (3-2, 3-2 SAC) in the South Atlantic Conference road affair before holding on for a 16-14 victory in the deciding fifth set. Both of the first two sets were decided by just two points, 26-24, before Mars Hill won sets three and four, 25-22 and 25-21, setting up the decisive fifth.

Led by a career-high 22 kills from freshman outside hitter Haley Brown, LMU got a career-best double-double from junior setter Emily Walter, who notched a career-high 61 assists and made a career-high tying 20 digs.

Consistency proved to be the difference-maker for the Lady Railsplitters, who totaled 14 kills or more in each of the first four sets and attacked at a clip over .200 in all but the fourth stanza. LMU overcame 69 kills by the Lions across the first four sets and limited Mars Hill to just six kills and a .103 attack percentage in the all-important fifth.

Despite trailing 14-13 in the final set, the Lady Railsplitters put together three consecutive points to secure the match. A kill by sophomore middle blocker Sierrah Lemons knotted up the score at 14 before back-to-back Brown kills off Walter passes clinched the road tilt.

The Lions were led by Jana Cuk’s 26 kills, three blocks, and two aces and Mars Hill got 35 assists from Sara Pasour and 34 digs from Ully Martins.

Up Next…
The Lady Railsplitters wrap up their lengthy four-match road swing and close out their weekend Saturday afternoon at Lenoir-Rhyne. First serve from inside Shuford Memorial Gymnasium in Hickory, North Carolina, is slated for 2 p.m.