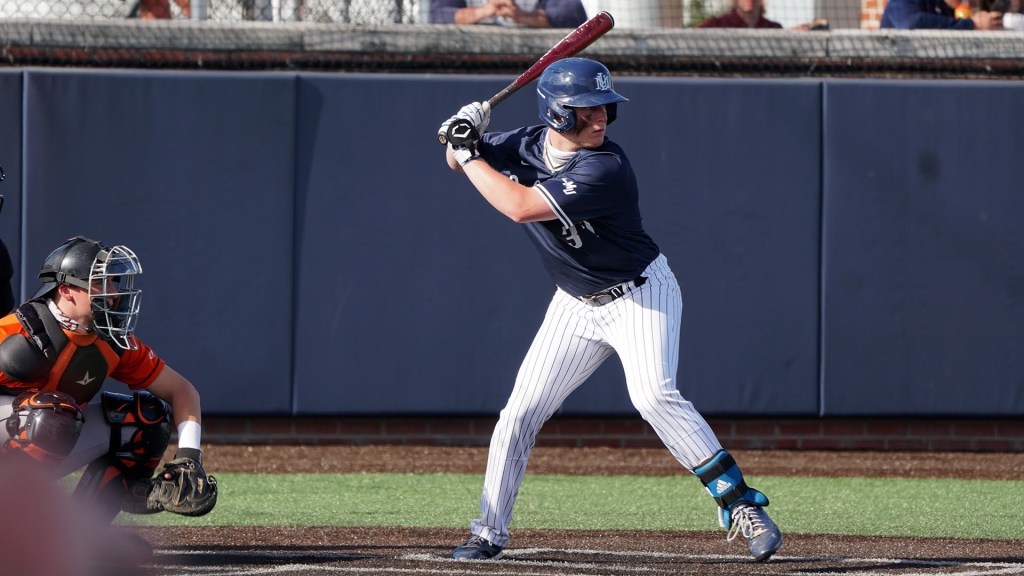 HARROGATE, Tenn. – Just one day after knocking off the No. 22 team in the nation, the Lincoln Memorial University baseball team struggled to add numbers to the lower portion of the scoreboard Sunday afternoon at Lamar Hennon Field. Limited to six runs on the day, the Railsplitters (9-16, 8-12 SAC) were handed a pair of South Atlantic Conference setbacks by local foe Tusculum University in the weekend’s second doubleheader.

The Pioneers (17-4, 13-3 SAC), who sit in second place in the league standings, closed out the four-game series with a 7-3 win in Sunday’s opener before getting a 9-3 triumph in the weekend finale. Tusculum powered 23 hits across the doubleheader and got 19 strikeouts from its pitching staff, holding LMU to seven hits in each game.

Game 1 | No. 22 Tusculum 7, LMU 3
The Pioneers scored runs in four different innings, tallying two in each the second, third and sixth frames before adding an insurance run in the top of the seventh. A two-run, three-hit bottom fifth inning got the Railsplitters within a run at 4-3 but LMU was unable to collect a hit across the final two frames of the scheduled seven-inning affair.

A pair of wild pitches led to two Tusculum runs in the top of the second inning with a bases-loaded, one-out wild pitch allowing first baseman Luis Ezra to reach home. Moments later, catcher Jordan Beaver grounded out for an RBI with third baseman Jaden Steagall scoring to make it 2-0.

In the top of the third, the Pioneers clobbered back-to-back RBI doubles after a leadoff hit by pitch. Tusculum shortstop Bryson Ford drove a pitch into left field to score a run and right fielder Brandon Trammell took one to right center field.

The Railsplitters’ first run of the day came in the bottom of the fourth when redshirt freshman catcher Sam Mast lined a double to left field, scoring redshirt sophomore centerfielder Zach Fritts who reached on a Pioneer error. Graduate right fielder Brent Richey led off the bottom of the fifth with a walk before a one-out RBI single to left center field by redshirt sophomore left fielder Andrew Keene brought in Richey to make it 4-2. Following a single to left field by freshman designated hitter DJ Alexander, Jr., Fritts rocked an RBI single to make it a one-run game.

Three more Tusculum hits in the top of the sixth gave the visitors another two runs. Leading off with back-to-back singles, the Pioneers got an RBI sacrifice bunt from Steagall and a one-out RBI double to left center field from left fielder Murphy Flood. With left-handed reliever Mitch McCain in control on the mound, Tusculum tacked on a run in the top of the seventh when designated hitter Daalen Adderly tripled to center field for an RBI.

Fritts finished 2-for-3 at the plate with an RBI and a run scored and both Richey and graduate third baseman Tyler Adams went 1-for-2 with walks.

Redshirt sophomore right-hander Patrick Queener (0-1) took the loss on the hill after going four innings and striking out four. Freshman right-hander Brennan Murphy had a solid inning of relief, striking out one and allowing just one hit in the sixth.

Left-handed starter Keegan Ernest (3-1) got the win after striking out four in four and 1/3 innings and giving up only one earned run. McCain earned his third save of the season with two and 2/3 innings of one-hit relief.

Game 2 | No. 22 Tusculum 9, LMU 3
Building a five-run lead after three-and-a-half innings, Tusculum recorded 13 hits and scored four runs across the seventh and eighth frames. All three of LMU’s runs in the contest came in a four-hit bottom fifth inning.

It took the Railsplitters some time to figure out Pioneer right-handed starter Tyler Harmon, who struck out 12 of 28 batters faced and held LMU to only one hit in the first four innings.

Getting within two runs in the bottom of the fifth, the Railsplitters scored all three of their runs with two outs. An RBI double to left center field by redshirt junior first baseman Brandon Parrott brought home graduate shortstop Zuriel Collins before Adams doubled down the left field line for Parrott to score. Keene then smacked a deep ball to center field as Adams scored, but was thrown out at second after over running the bag to end the inning.

Pushing its lead back out to five, Tusculum put up three runs in the top of the seventh. Designated hitter Furr hit an RBI double before scoring on a balk and Steagall connected on a sacrifice fly to make it 8-3. The final run of the day came in the top of the eighth when Trammell followed up a Ford double with an RBI single to right center field.

Except for an Alexander, Jr. leadoff single in the sixth, a Richey walk in the seventh and a Fritts single in the ninth, LMU could get nothing going in the last four innings.

Harmon (2-1) got the win on the rubber after going six and 2/3 innings as right-hander Justin Parker and righty Trevor Lloyd combined to strike out three with only one hit in two and 1/3 innings of relief work.

Up Next…
The Railsplitters step out of conference play for a midweek road tilt on Tuesday, traveling to Nashville and facing Great Midwest Athletic Conference member Trevecca Nazarene University in a 4 p.m. first pitch.