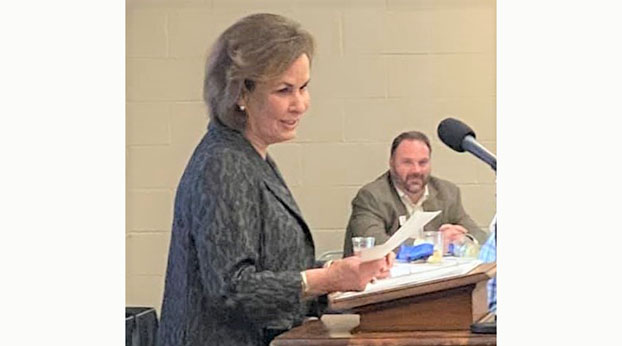 Eleanor Yoakum accepts the 2021 edition of the Good Scout Award from the Smokey Mountain Council of the Boy Scouts of America during a banquet.

Family, friends and well wishers gathered together to honor the lifetime achievements of Eleanor Yoakum during the annual banquet of the Smokey Mountain Council of the Boy Scouts of America.

Yoakum has been an influential mover and shaker for over 50 years within the community in which she was born and raised.

She is quick to honor her father, the late Glenn Yoakum, who she says taught her by example the meaning of quietly giving back to your hometown.

Raised in the banking business, Eleanor learned the ropes from the ground up, steadily climbing that ladder rung by rung to her current position as Chairman of the Board of 1st Century Bank.

A graduate of Fairfax Hall and East TN State University, Eleanor earned the designation of outstanding alumna in 1999. She was appointed to the Tennessee Arts Commission by then-governor Lamar Alexander, where she served as vice-chairman and chairman from 1987 to 1989.

Yoakum served as the Commissioner of Personnel from 1996 through 1999 under then-governor Don Sundquist prior to moving into the role of Sundquist’s Chief Administrative Officer, where she remained until 2002.

A strong advocate for education and the arts, Eleanor has served several boards including stints with the Walters State Community College Foundation, the East Tennessee Foundation and the Tennessee Higher Education Commission.

She was appointed to the Board of Professional Responsibility by the Tennessee Supreme Court, where she served as Vice-Chair in 2015. Yoakum currently serves on the TN State Museum Commission and the TN Educational Lottery Board.

The money raised during the banquet will support Claiborne County Scouting in 2021. This year’s event raised some $19,000 that will go towards the cause.

For more information on the Boy Scouts of America, log onto: www.easttnscouts.org.