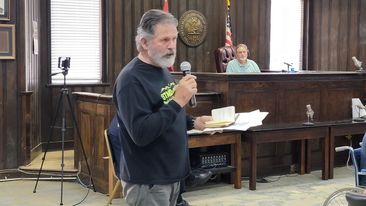 The Claiborne Commission will be digging further into the particulars of two hot-button topics during a workshop scheduled for June 7. The proposal to reduce the size of the commission from its current 21 to 9 members was tabled during the opening moments of its discussion.

The commissioners spent a good bit of time debating concerns about the Helen Ross McNabb drug program and rehashing the failed resolution to purchase a metal building. The structure, carrying a $175,000 price tag, would have housed those female inmates accepted into the program.

County mayor Joe Brooks reviewed the controversial topic at length. Brooks fielded questions about the nuts-and-bolts of the $500,000 in ARC (Appalachian Regional Commission) grant funds which, he says, is still in play.

Brooks said he had contacted CTAS (County Technical Assistance Service) about the issue and was told by its attorneys that the county is “too far down the road to back out.”

Brooks reminded the commissioners that the county has two months before it will be out of compliance.

“You can very much still amend the grant,” said Brooks, referring to finding alternate housing. “I don’t know where in Claiborne County we can find a building that will accommodate overnight stays for eight women in each cohort that go through the program.”

He answered concerns about the women who would be unsupervised during evenings and weekends.

“This is 100 percent true. They’re also not supervised in Hamblen County (where the program has been successful). There may be some misunderstanding on the women that are allowed in the program. An active (drug) user on Friday being picked up and in the jail for a 24 hour period is not going to go to the judge on Monday morning and be allowed in the program,” said Brooks.

He said qualifying inmates would need to be under TDOC supervision and have less than one year left on their sentences. McNabb would be responsible for qualifying these women.

Once the inmates enter the program, they are no longer residents of the jail. Instead, they are in custody of the McNabb program, he said.

Brooks referred to a caveat in the Hamblen County program that requires those not completing the 12 weeks to return to jail, where they will finish their original sentence.

If anyone walks off from the program, an escape charge will be added to their sentence, he said.

Brooks discussed concerns about the lack of security cameras. He said part of the county’s portion of the 30/70 matching grant could be used “in kind” by installing an alarm system that would trip directly to E-911.

“Of course, that’s not a county risk because those ladies are no longer in custody of the county jail. They have been dismissed into the program by the judge,“ said Brooks. “Claiborne County is not on the hook by utilizing this grant money. It’s simply to help Helen Ross McNabb start a much-needed program in the county.”

He proposed purchasing the building and “giving it” to McNabb for as long as the program is in operation, much like the county structures given to voting precincts for the length of their use.

If and when the building is no longer used for that purpose, it would be specified in the deed that ownership would revert to the county.

Brooks said he was concerned that if the grant is surrendered, it would affect how future ARC grants are awarded.

County attorney James Estep III agreed, saying the county would be placed in “the basement list” for any future grant consideration, which is effectively a “black eye” for the county. The status would likely affect the outcomes from other granting agencies as well, he said.

Commissioner Steve Brogan raised questions about perceived inconsistencies in the contract, in particular the $35,210 counselor salaries. He said he was also concerned about the 18 months stated in the contract.

“It’s my understanding this is a three year grant,” said Brogan.

Brooks assured the commissioner that the length of the grant is 36 months long. He said the first quarter will not be paid out until month seven due to start-up time.

“These staffing positions are not getting paid out from day one because of the program implementation they have to do, on their end,” said Brooks. “Everything you see here is paid out of the $500,000 grant. It’s not a county run program. It’s not something to be put in the budget. If after three years, we’re not meeting the criteria that we need to do to get the numbers, the program stops.”

Audience member Wayne Lee asked who will manage the grant. Brooks said he would but that the program will be supervised by a McNabb employee.

Audience member Don Bryant asked who would be responsible for any medical expenses if one of the women in the program “got out, had a good time and gets pregnant,” resulting in her being kicked out of the program and sent back to jail.

Brooks said that any medical costs derived from any county inmate is “part of the risk.”

He said that if the doors are opened after hours, E-911 would be notified via an alarm.

Earlier in the meeting, commissioner Juanita Honeycutt raised concerns about the size of the metal building being too large to house just eight women at one time. Honeycutt said any possible county liability issues and the general maintenance and repair costs were also worrisome.

The June 7 workshop will begin at 6:30 p.m. inside the large courtroom of the Claiborne County Courthouse. The public is invited to attend.

Dan Spurlock, with Stand in the Gap Coalition, was asked to attend as a consultant. Spurlock has had extensive experience dealing with these types of programs through the nonprofit he oversees with his wife.