Baird resigns from E-911 after ‘demotion’ 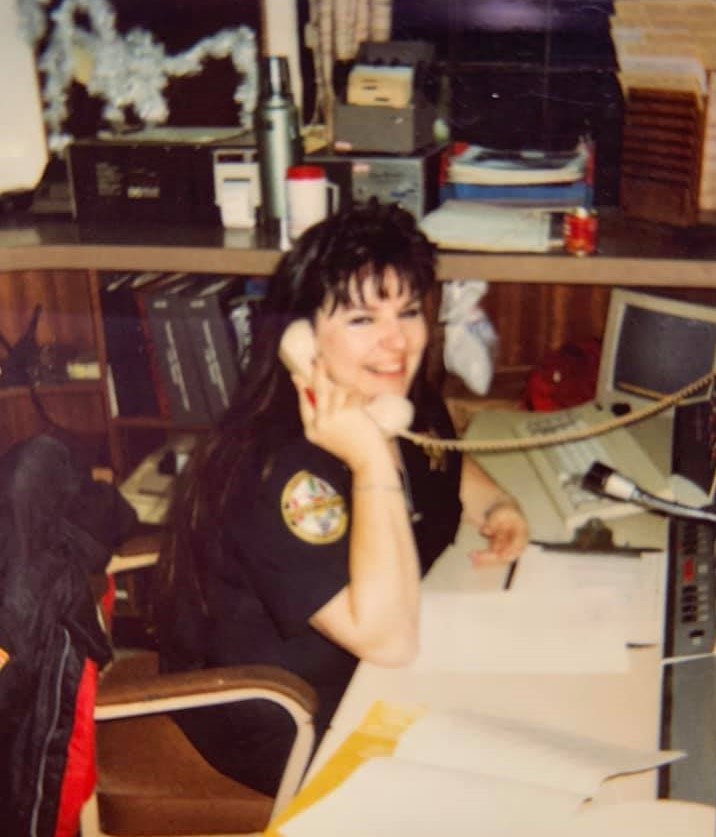 Mary Jo Baird, former Claiborne E-911 interim director, is shown during her early years as a dispatcher when the county’s emergency communications system was part of the Claiborne Sheriff’s Office. Today, the system is a separate entity. The service was mandated by the state and the system approved by the Claiborne County Commission during the fall of 1992.

Veteran dispatcher Mary Jo Baird has resigned following what is essentially a ‘demotion’ as interim director of the Claiborne E-911 system. The Claiborne Emergency Communications Board decided during its May meeting to appoint Claiborne Sheriff Bob Brooks to the post effective immediately.

One of his first duties was to appoint dispatcher Tammy Day as his assistant, effectively placing Baird back into the dispatcher pool.

A 32 year veteran of the service, Baird was appointed interim director when former executive director Roger Hager decided to resign.

Sheriff Brooks said during an interview that the board voted to make the change due to the dismal results of a Mission Critical Security Assessment. The audit was performed by the Tennessee Emergency Communications Board.

The assessment results show that the Claiborne E-911system scored a 58.30 presumably out of a total 100 points. Its main concern is with cyber security issues.

The low score is significantly below public safety grade, according to the audit findings.

“The security system could be hacked,” said Brooks. “And, there’re a lot of other issues. There was no malice or anything else (associated with replacing Baird as interim director).”

He did not elaborate on just what “the other issues” were, however.

Mike Campbell, who is the Claiborne County Commission chair and a member of the E-911 board, made the initial motion to appoint Sheriff Brooks as interim director.

In an interview, Campbell said the biggest concern was the lack of communication between E-911 and the Sheriff’s Office, especially during dispatch of officers to the scene.

He says it was recommended by county mayor Joe Brooks that the Sheriff be appointed to the interim position “because they get most of the calls.”

“Before 911 was even brought into existence, the Sheriff’s Department was over dispatch,” said Campbell, adding that it seemed the natural move to temporarily appoint the sheriff until a permanent director could be hired.

Campbell was asked if there were other worrisome issues that prompted the appointment – if there were any concerns with job performance.

He said he had not seen any list of complaints. When pressed, Campbell did say some of the issues were mentioned during the board meeting but he had not been privy to a formal complaint list.

He did add that another major concern was the outdated equipment being used in the E-911 dispatch office – arguably the most important department within the county.

Campbell said it was brought up during the meeting that the antiquated equipment was likely the major reason for the breakdown in communication between the dispatchers and the Sheriff’s Office.

“This has been an ongoing problem for a long time. And, I’m not saying anything bad about Ms. Baird. But, with the complaints I did hear and had been hearing combined with what the mayor recommended, I made the motion for the sheriff to be overseeing it until we hire a director,” said Campbell.

He added that the vote was unanimous.

Campbell did say he was “highly shocked” that Baird decided to resign.

“I figured she would stay on and apply for the directorship,” said Campbell.

The Claiborne Progress is in receipt of the list of employee complaints, which was attached to the copy of the official Mission Assessment when emailed from the Claiborne Sheriff’s Office.

Included in the list are inconsistencies with pay to hours worked and too much overtime due to insufficient part time shifts being incorporated into the work week. The list states there are some employees working up to 10 days in a row without a day off. Also on the list are concerns of favoritism, failure to apprise workers when policies change and instances of incomplete CAD entries.

Some employees, according to the complaint list, are not completing paperwork due to socializing with officers. Other employees are allowing visitors to the dispatch room and/or mapping office, when they should be restricted to the pickup window.

As of press time, several attempts to reach Baird were unsuccessful. She was interviewed last year upon attaining 31 years as a dispatcher. Baird spoke of her continuing passion for her job.

She said during that interview that she essentially fell into dispatching following the closure of her family-owned roofing business. Baird secured the dispatcher job under then-sheriff George Malone.

“I went (to the unemployment office) and filled out an application. They called me a couple weeks later and I went in for an interview, was hired and started working that afternoon. It took me about one hour to decide that I absolutely loved this job and that I was right where I needed to be. I’ve always heard that if you love what you do for a living, you will never work a day in your life – and, that’s the truth. There has never been a day that I dreaded going to work.”

When Baird first sat behind the emergency switchboard, there was no such thing as Claiborne E-911 and the Claiborne County Emergency Communications District. That service was established in the fall of 1992 when the Claiborne Commission approved the creation following the state mandate that counties do so.

Just last year the Office of Attorney General for the 8th Judicial District presented Baird with a plaque of appreciation for her decades of service.

During the presentation, attorney general Jared Effler commented on the excellence of service Baird has demonstrated.

“Our dispatchers are heroes behind the scenes and Mary Jo is a leader among them. Words can’t express how much I appreciate the work that Mary Jo and all of our dispatchers do on a daily basis to keep us safe,” said Effler, at the time.

Baird said directly following the presentation that she had no plans to retire anytime soon.

“Something I love is helping people. I hope to continue doing this for several more years. No career path I could have chosen could possibly have been as rewarding as dispatching has been.”

Campbell says the Emergency Communications Board is currently working on a comprehensive list of job duties expected to be performed by the director. Once completed, the board will move forward in advertising for a permanent director, he said.

The next regular monthly meeting of the Claiborne Emergency Communications Board will occur on June 15, beginning at 1 p.m. inside the Claiborne Justice Center training room. The meeting is open to the public.