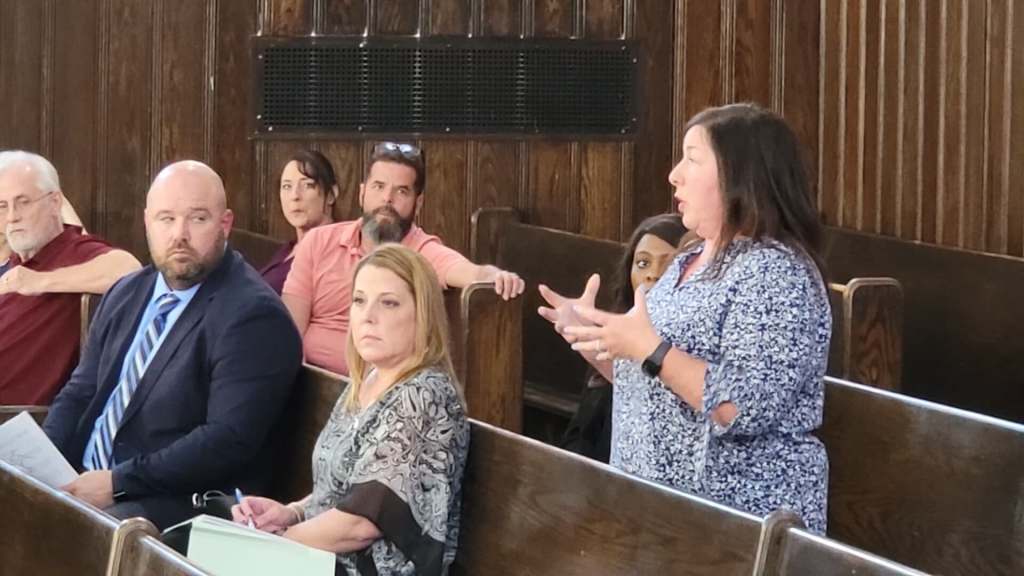 Shown are representatives from Helen Ross McNabb. Standing is Sharon Reid, director of Hamblen County Services/McNabb Center. Sitting on the next bench forward is Jason Lay, CFO/vice-president of the McNabb Center. Also shown is Kyle Prichard, pastor of The Hill Church, sitting one bench over from Reid.

The county could be a baby step closer to opting into the Helen Ross McNabb Drug Program for female inmates.

Few, if any, new questions were tossed around during a protracted workshop held by the Claiborne County Commission. The commissioners spent roughly 90 minutes rehashing the same concerns brought up during previous meetings – two of the main issues being funding and ‘the building.’

About eight months ago, the commission unanimously agreed to purchase a metal building that would house the program inmates in the event the $714,000 ARC grant was approved.

The county was awarded the 70/30 matching grant, meaning $500,000 in Appalachian Regional Commission funds would be added to the county coffers and earmarked for the drug program. The county would be responsible for the remaining $214,000.

Questions began to circulate earlier this year about the building. However, none of the 21 commissioners were willing to explain just why the building was unacceptable other than to say that the $175,000 price tag seems a bit steep.

Dan Spurlock, who oversees Stand in the Gap Coalition, was asked to act as a consultant. Spurlock said he felt the structure is not overpriced.

“The building is commercial grade 3,000 sq. ft. with 25 beds, two apartments in the back, a full laundry with a full commercial kitchen. It’s set up exactly for what you’re talking about doing,” said Spurlock.

Commissioner Juanita Honeycutt broke a chunk of ice during the May Commission meeting when she first broached her worries with the issue of county liability. Honeycutt brought the subject up again during the workshop.

She suggested moving forward with the purchase with the stipulation that the building be deeded to Helen Ross McNabb for sole use in the inmate drug program. If the program fails, the deed would be reverted back to the county, she said.

“In my mind, that would solidify our partnership and belief in Helen Ross McNabb. A lot of people are thinking about the liability for the county,” said Honeycutt.

Sharon Reid, director of Hamblen County Services, and Jason Lay, CFO and vice-president of the McNabb Center fielded questions during the workshop. Hamblen County mayor Bill Brittain was present and spoke briefly about the program as designed in his county.

Lay said he had no problem with the county deeding the building. However, doing so might interfere with the grant match.

Claiborne county mayor Joe Brooks said he would check with ARC representatives about the issue.

Commissioner Kim Large said she was concerned about security issues, especially between the hours of 9 p.m. and 8 a.m. when the women would be unsupervised.

“Is anyone monitoring the security cameras? What if a fight breaks out,” said Large.

Reid said the cameras are not monitored but are recording 24/7 for play back in the event something was to happen. She said the program is geared to building coping skills rather than relying solely on a counselor to resolve issues. The women receive daily and/or weekly one-on-one therapy sessions within a structured program, she said.

Participants will receive several weeks of intensive therapy prior to starting work or otherwise going out into the public.

The program is designed for nonviolent female inmates who have already served a substantial portion of their sentence. Only those who are deemed safe by the judge will be eligible for the program.

Commissioner Steve Brogan said he was still unclear about the financial side of the contract. Brogan pointed to what he said were inconsistencies, particularly with staff salaries.

He asked why the numbers in the contract are for only 18 months when the program is supposed to run three years.

“Where’s the rest of the money coming from for these salaries? This just doesn’t add up if you’re going to have them supervised. The way I see it, it’s not going to be a three year program. It’s going to be a year and a half program,” said Brogan.

Mayor Brooks explained the timeframe. He said it would be seven months before the first cohort of women are taken into the program. At that time, money would begin to be subtracted for staff salaries.

“The first 18 months is the reportable period for the data to justify them giving us the money. The remaining money is still there for the remaining nine or 10 months of the program,” said Brooks.

Lay was asked by commissioner Zach Mullins what would happen if the county could not come up with the required inmates for each 12 week cohort. He questioned whether the county would lose any of the grant money if eight female inmates did not qualify each session.

Lay said it was his experience that ARC would allow those funds to roll over to the next cohort.

Commissioner Whitt Shuford spent a moment near the end of the workshop talking about the success of the McNabb Program in nearby Hamblen County. He reiterated some of the particulars that Mayor Brittain had disclosed earlier in the meeting. He said that over the course of a year, approximately 27 women had had their lives changed for the better.

According to Brittain, the county had invested about $90,000 per year to keep the program going once the grant came to a close.

Shuford elaborated on the subject.

“If at the end of three years when this grant runs out and we are forced with some tough decisions, if we are saving 27 women’s lives in this county every single year – I don’t think any of them (the taxpayers) are going to fuss when we force this tax on them or that tax on them for things that they can’t see. If we had to come up with $100,000 a year and we’re saving 27 women’s lives in this county, I don’t think there’s anybody in this county that’s going to look at anybody sitting here (on the commission) and say ‘don’t vote for that,’” said Shuford.

Kyle Prichard, pastor of The Hill Church who oversees the state-certified Live Free Recovery Program, spoke from the audience. He questioned the hesitance on the part of the commission to move forward with the program and the lack of enthusiasm in even touring the metal building.

“You all are voting on something you’ve not even been in the building to look at? That’s kind of scary. There are other drug programs in the community that are willing to help support this,” said Prichard. “This is a no-brainer. You got a building already ready to go. Let’s run with it.”

If the property is placed back on the table for purchase, the county would have about $39,000 left to spend as its portion of the match. One solution would be the purchase of a transport vehicle to carry the women to and from work and appointments.

The Claiborne Commission is expected to revisit this topic during its next meeting, scheduled for June 21 at 6:30 p.m. inside the large courtroom of the Claiborne County Courthouse. The meeting is open to the public.