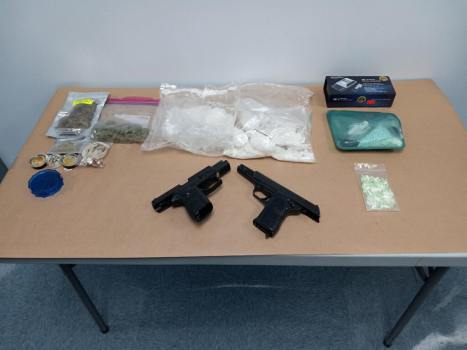 A joint investigation by the CCSO and TBI netted some $350,000 in illegal narcotics being muled into the county by a California felon.

A California felon who muled various illegal narcotics worth approximately $350,000 in street value is currently sitting in the Claiborne County Jail, arrested and charged as part of Operation Summer Heat.

William Calvin Lanum, 57, of San Diego was arrested on Friday as a result of a joint investigation by the Claiborne County Sheriff’s Narcotics & Criminal Investigations Division and special agents with the Tennessee Bureau of Investigation.

The lengthy investigation involves capturing those who are transporting large amounts of illegal drugs into Claiborne County for sale.

During the evening hours of Aug. 20, detectives conducted a traffic stop along Hwy. 33 which netted over two pounds of methamphetamine along with large amounts of heroin, fentanyl, cocaine, marijuana, prescription medications and psilocybin mushrooms.

Lanum was also found in possession of two handguns at the time of his arrest.

He is charged with multiple felony counts including possession of methamphetamine and heroin for resale.

Bond has been set for $1 million. Lanum is scheduled to appear in court for a status hearing on Sept. 9.

This investigation is active and ongoing with additional arrests expected.