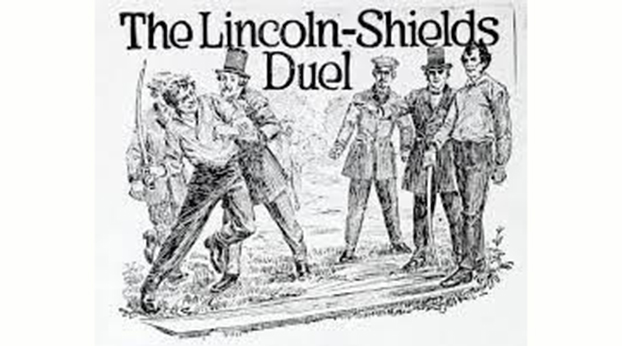 Abraham Lincoln, a Whig party member at the time, was elected to the Illinois state legislature in the late 1830s at the time democrat James Shields was also a legislator. They often found themselves on opposite sides, yet helped in bringing their respective parties together on important issues. This changed when Shields became Illinois state auditor.

The Illinois state bank defaulted in 1842 and Gov. Thomas Ford and the state treasurer wanted tax collectors to accept only gold and silver in payment of state indebtedness, to refrain from taking paper money. Shields was embroiled in the mess and soon found himself being mocked in the press. Lincoln had an inflammatory letter published in the Sangamon Journal, a Springfield, Illinois, newspaper making fun of Shields as if he were inept.

He used a fictitious name. The letters continued from random individuals such as “Raymond” and “Alice.” The accusatory letters increased in what appeared to be groundswell support against Shields. Such letters or public announcements were not uncommon in that era when news sources published letters from unnamed sources.

Shields was exasperated and took offense to the articles as they built in intensity. He complained to the newspaper editor and eventually learned that Abe Lincoln was responsible for the damaging publicity. He wrote Lincoln a demand letter, a cease and desist, insisting on a retraction. Lincoln refused thinking Shields would probably be willing to accept only a desist. Abe underestimated Shields who promptly challenged the young legislator to a duel.

All at once Lincoln’s career, his blossoming thoughts of matrimony, his future, and life itself, were at stake. To take it a step further, considering the 33-year old would become at least one of our nation’s most respected presidents, Abe Lincoln was playing roulette with our young nation’s future. What outcome would have resulted from the Civil War without Lincoln? Fortunately a guiding force, a divine plan, intertwined.

The culture of the times was to defend one’s honor. That’s what James Shields had done in challenging Lincoln and Abe could think of no reasonable way out but to accept his challenge. He really didn’t want to stand at thirty paces and exchange gunfire with Shields, a brigadier general from the Mexican War.

Lincoln was crafty even at a young age. He had the right to pick the terms of the duel. After considerable thought he decided on using his distinct advantages to affect the outcome. Lincoln was 6’4”, our tallest of U.S. presidents.

He was wiry and had long arms.

Abe determined his attributes would be advantageous in a duel or clash with broadswords …especially in a deep pit. The two combatants would be separated by a piece of plywood which neither could cross. Lincoln felt these rules would give him a great advantage. The ball was now in Shield’s court so to speak.

Shields was greatly surprised that Lincoln’s choice was broadswords, in a pit and with a barrier between. He had never heard of such. He felt he must accept to defend his honor and the two were scheduled to duel on September 22, 1842.

The two met across the Mississippi River on a Missouri island, Sunflower Island, since dueling was illegal in Illinois. Lincoln warmed up before the beginning by easily wielding his broadsword and exhibiting his great range (due to his great height and arm length), even trimming branches from trees way above his and Shields’ heads.

Shields looked small and found the broadsword cumbersome to handle.

Shields didn’t want to go through with it. Lincoln didn’t either but neither wanted to say it. This is where their “seconds,” their assistants in the affair who could speak for them, saved the day.

Lincoln’s seconds explained that Lincoln had written the initial “tame” letter compared to the more blistering ones that were written by his future wife Mary Todd and her close friend. They explained this was done without Lincoln’s knowledge. After this explanation and suggesting it would be the best for all to depart and go back to Illinois, Shields was elated with the explanation and an agreement was made. There would be no duel.

Lincoln and Shields became close friends and the future president became more careful in his letters and other papers following the aborted duel.

Jadon Gibson is a freelance writer from Harrogate, Tennessee. His writings are both historical and nostalgic in nature. Thanks to Lincoln Memorial University, Alice Lloyd College, and the Museum of Appalachia for their assistance.