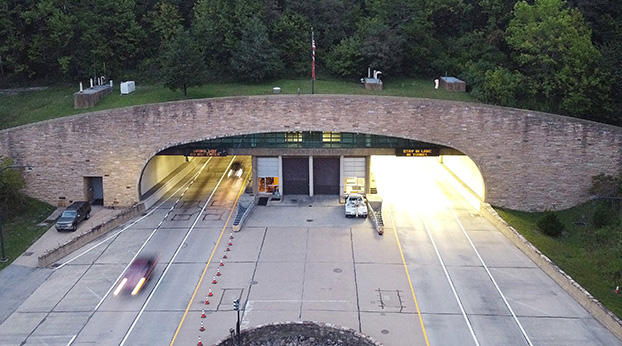 On Oct. 18, the Cumberland Gap Tunnel will be celebrated for its 25th anniversary. The tunnel — a dual-bore highway tunnel carrying U.S. 25E under the gap’s national park, located near the intersection of Kentucky, Tennessee and Virginia — opened to traffic in 1996.

“There’s a history on the mountain,” says Tom Coker, a mechanical engineer who’s worked at the tunnel since it opened. “The old Cumberland Gap, the road went up and over the gap — the original Daniel Boone pass.”

But once that road was built, Coker says the area had anywhere from three to five deaths up on the mountain every year, due to the dangers of the road.

“Some of the locals — it got the nickname of ‘Massacre Mountain,’ because it was so dangerous …” he says.

Over time …
The Federal Highway Administration (FHA) says the Cumberland Gap measures 1,304 feet in altitude, and is one of three natural breaks in the Appalachian Mountain Range. In a column that former FHA program assistant Rickie Longfellow wrote about the history of the tunnel, she said the Gap served as a gateway in prehistoric times for Native Americans to use as a footpath, and for buffalo to seek greener pastures.

Longfellow wrote that in 1750, a scientist led a party of explorers to the Gap, and named the river passing through the Cumberland River, after the Duke of Cumberland, who funded the trip. Daniel Boone explored the area in 1775, blazing the 200-mile trail now known as Boone’s Path.

The Gap was widened over time, Longfellow wrote, to allow wagons through to the west. Although by 1800, the Gap was used for commerce, including Kentuckians taking horses and cattle through to markets in the east, eventually other east/west routes were established and the Gap’s popularity dwindled.

After being held during the Civil War by both the North and the South, both sides were cleared and chopped. Railroads bypassed the Gap after the war, but the creation of cars brought the interest up again.

The original road was built by the government in 1908, connecting Middlesboro to Cumberland Gap, Tennessee, calling it the Government Pike. And because it passed Soldier’s Cave, which Longfellow said had become a tourist attraction, even more cars were coming to the area.

Lincoln Memorial University bought the gap and cave later, in the 1900s, then in 1925, it was included in the planning of highways.

The Cumberland Gap National Historic Park was established in the 1940s, which is shared with Kentucky and Virginia. 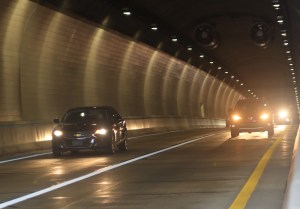 Today
“What’s so special about it?” Coker says, reiterating how dangerous the road was when it was referred to as Massacre Mountain.

“They decided to help alleviate the number of deaths by putting a road through. The national park wanted to restore the original Gap to the 1790s or so, when it was used as the westward expansion of the growing country.”

So, Coker says, with the two-fold reason of minimizing traffic fatalities and restoring the historical significance, “the only option they came up with was a tunnel…. I understand that even from the beginning in the ‘50s, when the park was first generated, they thought it’d be nice to restore the gap, build a tunnel. Eventually, that came into being.”

The four-lane, twin-bore mountain tunnel is 4,600 feet long, built under the mountain. Longfellow wrote that the cost was more than twice the original estimate, which resulted in a tab of $280 million, since there were some surprises during construction.

Coker says that the construction of the Gap took a pilot bore, due to the layers of rock “because of the impact from the meteor years ago. They’ve got layers of rock, more or less at a 45-degree angle.”

He says due to the cave system where water moves from, the designers had to relocate that water flow because it was perpendicular to where they intended to put the tunnel.

Coker says a pipe five-feet in diameter was installed under the southbound roadway, through the centerline area, going down through the tunnel, then comes underneath the northbound roadway back into the cavern system.

“For about approximately 100-feet, they had to divert the water flow. So they put the water back into the existing cave system, minimizing the diversion of water,” Coker says.

Coker, who is a historical reenactor in his downtime, says he loves history. “That’s one of the main reasons why I came to work here.”

But for his job, he oversees the mechanical maintenance crew. “There’s a lot of equipment needed, which we sometimes have to repair on the spot or may have to do troubleshooting.”

Coker says that as a child, he thought of a “tunnel as a black hole through a mountain somewhere. That’s the way I thought of them. But as you approach this tunnel, you see signs … they have to be maintained and powered. How? With equipment, which means maintenance.”

He says that in the early considerations of the design stage, “the decision was made to stop hazardous material and escort them through. So we stop mainline traffic and escort those trucks through.”

As far as a celebration for the 25th anniversary, Coker says since COVID is still playing a part, Lincoln Memorial University — just over the mountain on the Tennessee side — is putting together a video to release, commemorating the historical significance of the Cumberland Gap Tunnel.