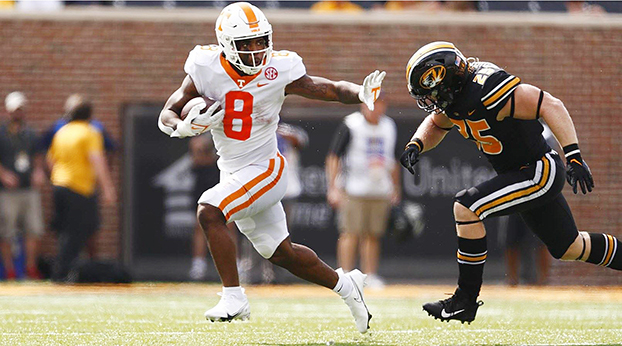 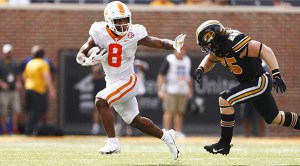 A record-setting offensive performance and sound defensive play led Tennessee to a 62-24 thrashing of Missouri Saturday afternoon at Memorial Stadium.

The Volunteers (3-2, 1-1 SEC) ran for 458 yards and five touchdowns and finished the day with 683 yards of total offense. The defense made two interceptions while holding the Tigers to 74 yards on the ground. Missouri came into the contest averaging 158.5 yards rushing.

The Vols raced out of the starting blocks, forcing a three-and-out to start the contest. Hooker and the offense took over, needing only five plays to reach the end zone. He found JaVonta Payton down the seam for a 35-yard touchdown, his third in as many games.

Missouri (2-3, 0-2) answered with a 14-play drive, lasting 5:15, and ending in a 43-yard field goal from Harrison Mevis. The Vol offense was quick to strike back, marching 75 yards down the field in 1:57 to score. Hooker, Evans and Jabari Small combined for 53 yards on the ground. Evans ran untouched into the end zone from eight yards out to put the Vols ahead, 14-3, halfway through the first.

After the Tigers’ offense stalled, Tennessee took over at its own 8, and Evans broke free at the line, sprinting 92 yards to the house to open up a 21-3 lead. It was the third-longest rush in Tennessee history and the longest since Eric Gray had a 94-yard touchdown vs. Vanderbilt on Nov. 30, 2019.

The next drive commenced for Missouri at their own 21. They only managed 11 yards before Jeremy Banks intercepted Connor Bazelak and returned it 31 yards before being stopped at the 1-yard line. Evans bulled into the endzone for his third touchdown in as many touches to extend the lead to 28-3, still in the first quarter.

After an action-packed first quarter, the Vols began another downfield march, leading 28-10. Hooker connected on a pair of long completions, including one to Cedric Tillman for 29 yards. Three plays later, the veteran signal caller found Velus Jones Jr., who slipped some tackles and dashed 32 yards to extend the advantage to 35-10.

The historic offensive output continued as the Vols took possession at their own 14. Len’Neth Whitehead had a career-long 33-yard gain to jumpstart the drive. Hooker linked up with Tillman on the right side to enter plus-territory. He then took it himself for 19 yards to get into the red zone. Evans looked to have his fourth touchdown of the day, but after review it was brought back to the 1-yard line. Hooker kept it on a zone read and broke through the plane of the goal with 4:49 left in the half, giving the Vols a 42-10 advantage.

The defense refused to be ignored, forcing a fast three-and-out and giving Tennessee the ball back at the UT 42. Showing a different style of play, the Vols ran a methodical drive, gaining 33 yards on the ground and 17 via the air before stalling out. A field goal from Chase McGrath sailed through the uprights from 25 yards out, upping the lead to 45-10.

The half was near flawless, seeing the Vols gain 275 yards on the ground and 150 through the air. Tennessee’s 45 points were the most it has scored in a game in a half since putting up 49 against Louisiana-Monroe on Sept. 23, 2000.

The second half commenced with Hooker making it happen through the air and on the ground. He rushed for 15 yards, while finding Princeton Fant and Jones for 21 yards. The drive slowed and McGrath came back out, drilling a 27-yarder making it 48-10. The Tigers found a much-needed jolt of energy, taking the ensuing kickoff 100 yards for the touchdown, but that could not break the rhythm of the UT attack.

A hard-nosed run game and spaced-out passing attack marched the Orange and White 75 yards on their second drive of the half.

Hooker found Tillman on a 24-yard post for his third passing touchdown of the day to make it 55-17, halfway through the third period.

Missouri was struggling to muster any consistent offensive prowess. Bazelak faced a 3rd-and-long just on the Vols side of midfield, but was picked off by Jaylen McCollough, who weaved his way through defenders for a 29-yard return to the MIZ 49.

Tennessee’s offense took the field for one final drive after a Missouri score that went the length of the field. Marcus Pierce Jr. finished the drive and the offensive explosion for the Volunteers with a 27-yard scoring run, his first since joining Tennessee and the Division I ranks.

The Vols return to Neyland Stadium next Saturday for their SEC home opener against South Carolina. Kickoff is scheduled for noon EDT on ESPN2. Tennessee legend Al Wilson will be honored as a member of the 2021 National Football Foundation and College Hall of Fame.