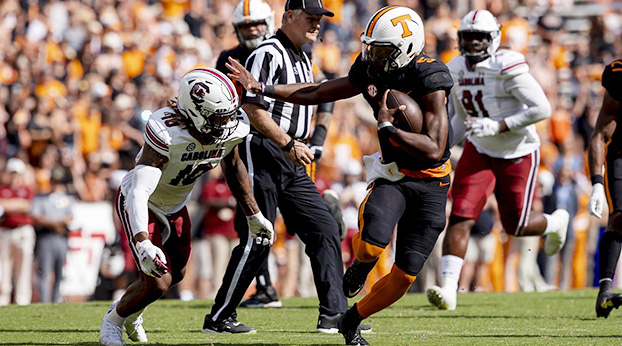 FORT WORTH, Texas – Tennessee quarterback Hendon Hooker was named to the Davey O’Brien Award’s Great 8 list this week after accounting for 291 yards and leading the Vols to a 45-20 win over South Carolina on Saturday.

The award marks Hooker’s second consecutive week earning recognition after being named a Manning Award Star of the Week by the Allstate Sugar Bowl following his performance against Missouri on Oct. 2.

The redshirt senior accounted for 291 yards and four touchdowns in Tennessee’s return to Rocky Top. He matched his totals from a week ago, throwing for 225 yards and three scores while adding 66 rushing yards and another touchdown on the ground.

Hooker leads the SEC in QB rating (185.89) and is the first UT quarterback to throw multiple touchdowns in five consecutive games since Tyler Bray had six in 2012. The North Carolina native has thrown 10 touchdowns without an interception since making his first start for the Vols against Tennessee Tech.

Against South Carolina the offense rolled to 472 yards of total offense and six touchdowns. Hooker has recorded at least three passing touchdowns and one rushing touchdown in three games this season, becoming the first Volunteer quarterback to do so since Joshua Dobbs had five such games in 2016.

After being named to a Great 8 list during the season, Hooker has been added to the Davey O’Brien Award Midseason Watch List and becomes eligible for consideration for the Davey O’Brien National Quarterback Award.

The Vols are back in Neyland Stadium for a showdown with No. 13 Ole Miss at 7:30 p.m. Saturday on SEC Network. Tickets for the game are on sale now at AllVols.com.