Together for a cause: Cumberland Gap versus Claiborne 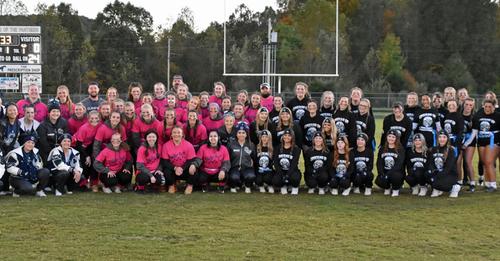 Cumberland Gap High School hosted Claiborne High School in a powder puff football game, October 26, to benefit Claiborne Hospital and their efforts to purchase an ICU blanket warmer. It was a great game as expected from the two rivals that compete hard in everything they do.

The game began with the defenses doing their job on both sides. The Lady Panthers got the offense going when Jaden Brock took the first play from scrimmage to the four yard line. Halee Green then took it in from three yards out but the two point conversion try was no good. At the end of first quarter Cumberland Gap led 6-0.

During the second period, both teams traded turnovers on downs before Emma Myatt hit Addie Brooks for a 14 yard Claiborne touchdown. The rare three point try was no good and the teams were tied 6-6.

The Gap responded when Emery Glover took a handoff 45 yards to the end zone as time expired in the first half. The two point try was no good. Cumberland Gap led 12-6 at half. During the halftime break, the bands from both schools put on their halftime shows.

When the third period got underway, Claiborne held Cumberland Gap at the goal line for a turnover on downs. Claiborne’s Hannah Fugate then hit Allie Jones for a 25 yard Claiborne touchdown. The three point try once again failed.

Tied at 12 late in the third quarter, Jaden Brock hit Emery Glover who made a great catch off a tipped pass for a 20 yard touchdown. The three point try failed.

Cumberland Gap led Claiborne 18-12 early in the fourth quarter but Hannah Fugate carried the ball in from one yard out. Fugate then hit Emma Myatt for the three point try. Claiborne led 21-18.

Cumberland Gap had one last chance but the Claiborne defense forced a turnover on downs and the final score was in favor of the Lady Bulldogs 21-18 in a very entertaining football game.