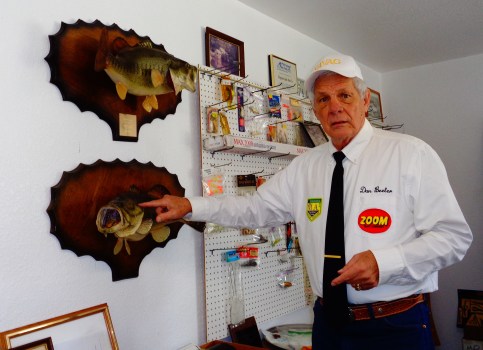 Master angler Dan Beeler points to one of his prized catches. 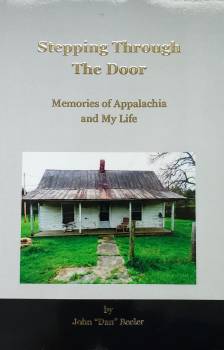 “Stepping through the Door; Memories of Appalachia and my Life” is selling like the proverbial hotcakes as friends, neighbors and strangers devour each word detailing a life of a poor farm boy who exceeds potential in a variety of vocations.

Author John “Dan” Beeler has dedicated the book to the mother who never gave up and the father who made the best of what he had.

The autobiography opens with a life-threatening case of food poisoning at the age of 14.

The lad survives with the constant reminder of the near-fatality via a huge surgery scar from three metal staples. Beeler would go on to endure five additional significant operations including one for cancer.

“I think back to when I wanted to throw in the towel and give up. But, I did not, and I want to stress how important it is never to quit and refuse to lose no matter how tough it gets,” reads the book, in part.

Beeler says he hopes whoever reads the autobiography will be inspired to take all that life offers them.

The book gives a bird’s-eye-view of Beeler’s life on the farm, catching the fishing bug in nearby Norris Lake and how he worked his natural fishing talents into becoming a Master Angler, winning the coveted award from the Commission of Game and Inland Fisheries of Virginia.

“I remember seeing a Bassmaster Magazine at a local store, but I did not have the money to buy it. I convinced Alice Carter her grass needed mowing and earned the money to buy the magazine. I read about Ray Scott and the Bassmaster Tournaments. I wanted to be a fishing pro. How could I do that? I was a poor boy from the mountains of Appalachia. Back then, I felt like a high-spirited horse tied up in a barn,” reads the book.

His love and immense knowledge of the lakes and streams created a lucrative 25 year career as a much-sought after fishing guide. Opportunity came knocking in 1988 as Beeler became the go-to for all things sports fishing with his self-produced cable show “The Outdoor World of the Virginia Guide.”

“We did a lot of bait testing in those days. We discovered one plastic fishing bait brand….OK, maybe we can sell fishing baits because these baits will sell themselves,” reads the book.

Beeler and his partner, Judie Henry, struck a deal with the distributorship and the “Virginia Guide Bait Co.” was born.

As the years continued to roll on, Beeler delved into other careers including the creation of “The Country Press” which sold business cards, flyers, signs, rubber stamps and other items.

The bulk of this endeavor lay on Henry’s shoulders, as she had the background and expertise in offset printing.

During all these endeavors, Beeler successfully held down what would become a 30 year career at Honeywell.

In another part of the book, Beeler describes how he became interested in Citizens’ Band (CB) radios.

Beeler says that shortly after high school graduation, he hitched a job as a trucker alongside his brother Jim. The youngster became interested when he noticed the airplay going on between truckers using their CBs.

His passion for the device led him in later years to purchase his own home-based Citizens’ Band equipment, reaching out to virtually the entire globe with the flip of a switch.

At the urging of a friend, an amateur radio operator, Beeler decided to join the HAM experience, earning his license in 2006 and going on to become a Volunteer Examiner.

The book is an easy and enjoyable read about one of our own county natives, with plenty of photographs sprinkled between the words.

Beeler will be signing his autobiography on Dec. 4, from noon to 2 p.m., at the Claiborne County Library. There will be copies on hand for sale.