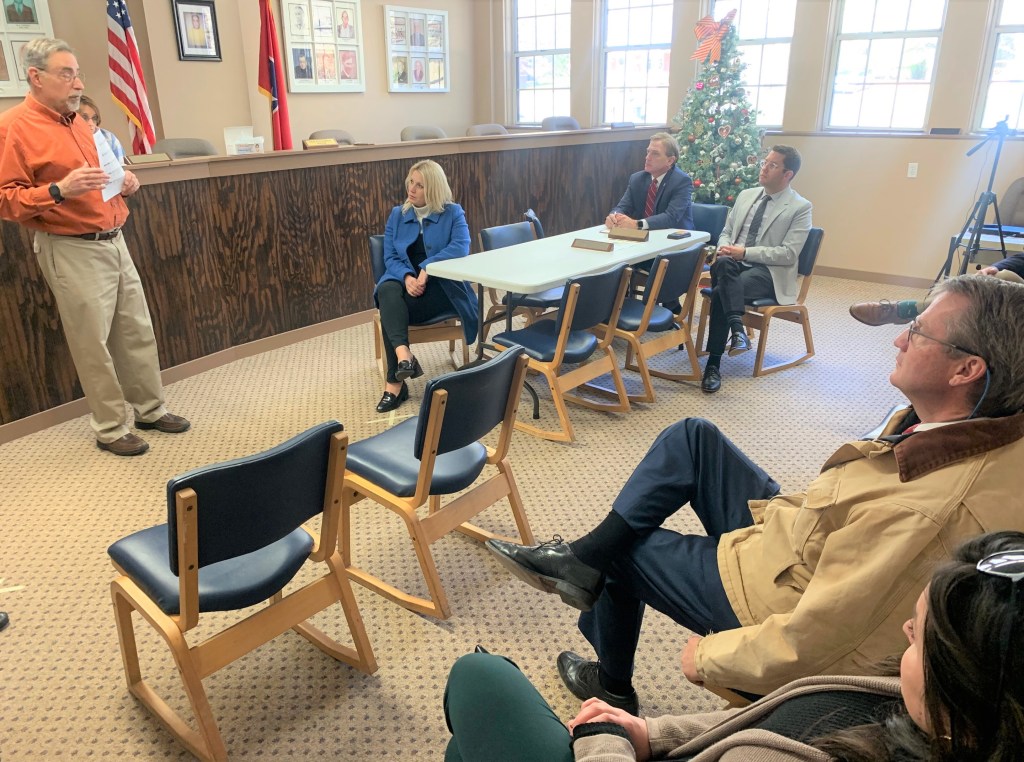 U.S. Rep. Tim Burchett, seated in audience, soaks up information about the historic town of Cumberland Gap during a recent visit to the county. Gap Mayor Neil Pucciarelli is shown (standing) during a presentation.

U.S. Representative Tim Burchett stopped in Claiborne County on Dec. 13 to dig a little deeper into the local connection between the rural tourism industry and business community.

Mark Ezell, Tennessee Tourism Development Commissioner, hitched a ride with Burchett to soak up the facts brought to light during the visit.

The day began at the Claiborne County Chamber of Commerce, where Burchett and Ezell were able to glean some informative tidbits from the members of the Tourism Board.

The two men then traveled to Lincoln Memorial University to be part of a local business roundtable.

Burchett and Ezell moved on to a tour of the historic town of Cumberland Gap where they were greeted by Gap Mayor Neil Pucciarelli and others in a meet and greet inside Towne Hall.

The visit ended with an informative discussion with Charles Sellars, the superintendent of the Cumberland Gap National Historical Park.

Karyn Clark, CEO and President of the Claiborne Economic Partnership, said she was appreciative of the time taken from busy schedules. Clark said she was especially glad that a representative from the Lee administration along with an elected federal official was willing to come see what the county has to offer.

“Congressman Burchett is amazing about coming and spending time with people in Claiborne County, and I’m excited to have the Commissioner of Tourism, Mark Ezell, here also. They need to see the hidden jewel Tennessee has in Claiborne County. We have Norris Lake, Cumberland Gap National Historical Park, the city of Cumberland Gap, Powell River, Tazewell Speedway, Woodlake Golf Course – we have so much to offer,” said Clark.

Burchett represents the 2nd Congressional District in Tennessee within the United States House of Representatives. The district encompasses Claiborne, Knox, Blount, Loudon and Grainger counties along with parts of Jefferson and Campbell counties.