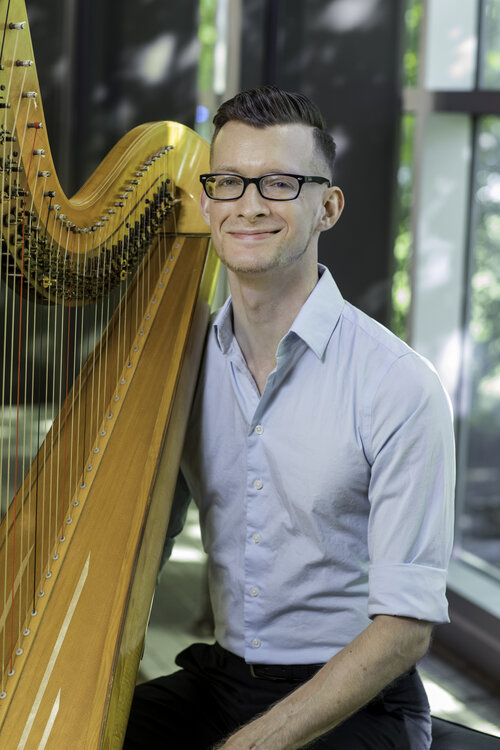 Rebman and his harp.

Rebman has a passion for new music, frequently performing solos and with ensembles around the U.S. He is currently principal harpist with the Kentucky Symphony, the Huntington Symphony in West Virginia and the Queen City Opera in Ohio. He was previously acting principal with the Amarillo Symphony in Texas.

An accomplished harpist and composer, Rebman is frequently involved in the premieres of new music and the promotion of the harp to composers. He has commissioned 30 works for solo harp throughout his career.

Rebman said he first discovered a love of new music as principal harp for the FiveOne Experimental Orchestra in Cleveland.

“My [LMU] program will be all music that was commissioned for me,” said Rebman. “A few of them will be premieres. Even though the program is all new music, it is very accessible. I’d say the musical theme is emotive music that showcases what the harp does best. Every piece is about conveying an emotion of some sort.”

Rebman has been harp faculty at the Mostly Modern Festival since the summer of 2019, where he gives lectures and seminars to composition students about the harp and performs new works by students and faculty as part of the American Modern Ensemble. Rebman has also given lectures on writing for the harp to students all over the country. He was invited to be a featured presenter at the 2018 American Harp Society National Conference, speaking as part of a panel on the topic of commissions and working with composers.

An active teacher, Rebman is director of the harp program at the Cincinnati School for the Creative and Performing Arts, a public arts magnet school where students in grades 4-12 have daily harp ensemble class. He is also professor of harp at Northern Kentucky University and president of the Cincinnati chapter of the American Harp Society.

Recent performance highlights include the July 2020 Mozart concerto for harp and flute with the Queen City Chamber Orchestra in Cincinnati, Ohio, and the premiere of his concerto “Hyperion” for harp and orchestra in June 2019 at the Mostly Modern Festival in Saratoga Springs, New York.

Previous accolades include semi-finalist for both the Concert Artists Guild Victor Elmaleh competition and the Classics Alive Artists competition, and a finalist for the National Collegiate Solo Competition hosted by the United States Army Band “Pershing’s Own.” He has also been recognized as a finalist in numerous other competitions.

As a composer, Rebman has written for a variety of ensembles while also specializing in modern techniques of harp composition. He has premiered harp concertos and solos and has been invited to numerous festivals.

Rebman is a native of Cincinnati and said he discovered the harp at ten-years-old through Disney’s “Fantasia,” which created “a love for all things harp that was fostered through study with the late Michelle Gwynne and performance in his school’s string orchestra for eight years.”

The event is free and open to the public. Masks are not required, but are encouraged.

Lincoln Memorial University is a values-based learning community dedicated to providing educational experiences in the liberal arts and professional studies.

The main campus is in Harrogate, Tennessee. For more information about the undergraduate and graduate programs available at LMU, contact the Office of Admissions at 423-869-6280 or email admissions@LMUnet.edu