Memory Lane is on Main Street 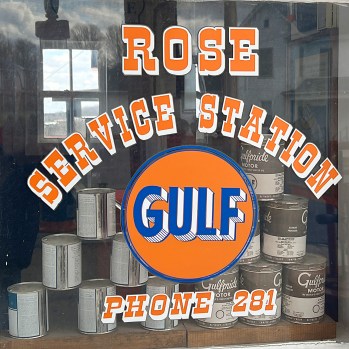 The front window of the old station gives a peek inside to the history that is detailed in the many displays in place for visitors. - Photo by Jeff Moreland 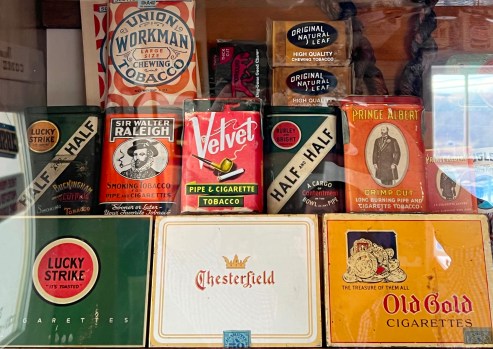 Packages of old cigareete and tobacco products line the shelves behind the counter at Rose Service Station. - Photo by Jeff Moreland 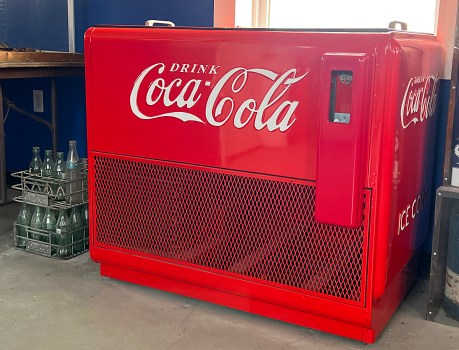 The classic Coca-Cola cooler looks as if it should be filled with ice-cold drinks, just as it was when the station was in operation. - Photo by Jeff Moreland 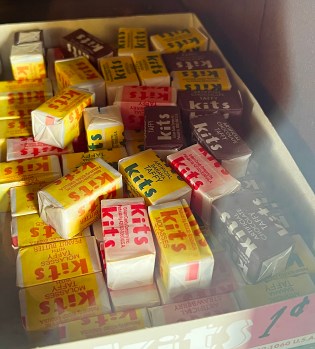 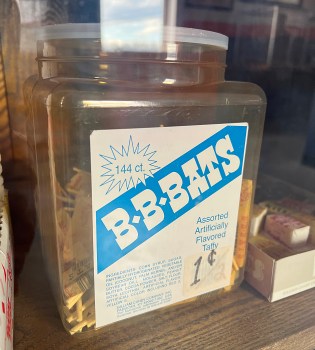 Classic taffy candies like BB Bats and Kits are just a few of the items on display in the Rose Service Station's front counter. - Photos by Jeff Moreland 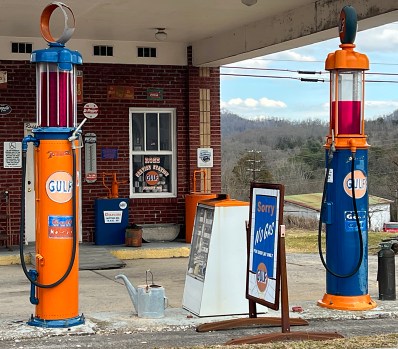 The antique gas pumps outside Rose Service Station are not in service, and the oil can display doesn't contain real cans of oil, but the look is authentic to the station's history dating back nearly 90 years. - Photo by Jeff Moreland 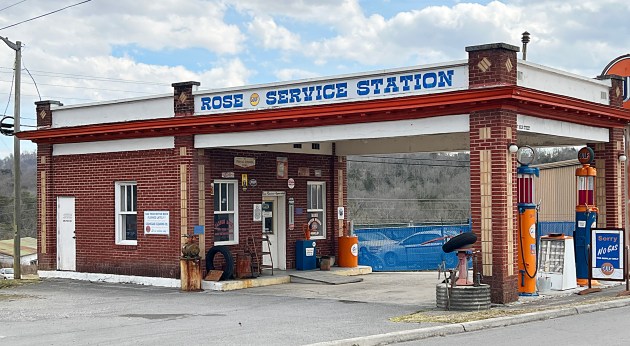 The Rose Service Station on Main Street brings back memories of times long in the past. The station now serves as a miniature museum that is well worth a visit. - Photo by Jeff Moreland

I’ve turned onto Main Street in downtown Tazewell many times, like most of you probably have. I’ve done it dozens of times, while you’ve probably done it hundreds or more. As I’ve driven along I’ve always passed the old Rose Service Station that sits on Main near Church Street, and I’m sure you have, too.

But have you ever stopped, taken a look around, or even gone inside?

Until last Wednesday I hadn’t. I always drove by admiring the neatly kept little station, thinking how it must have been one of the busiest places in town in its heyday. But I had never stopped to take a closer look, and I didn’t even realize it’s actually a small museum paying tribute to days gone by, tipping its hat to the history of Claiborne County.

I pulled onto the lot half expecting a team of men to run out in neatly pressed uniforms and begin to fill my gas tank, wash my windshield, and check my oil and tires. Although the station clearly isn’t open for business, I found that I had parked to the side of the lot, making a point to not block the gas pumps just in case someone else might pull in for a fill-up.

Outside the station I first noticed the old-style gas pumps. I’m 50 years old and I don’t remember those pumps being used, but I do recall the oil can displays near the pumps when I was a kid, just like the ones at the Rose station.

After peeking through the windows, I could see there were dozens of items that quickly brought back some childhood memories, and I was excited to head inside.

I opened the front door, and to the left sat an old wood-burning stove. It instantly reminded me of going to a gas station near my home when I couldn’t have been more than 7 or 8 years old and standing around a stove just like it. That old stove always had a warm red glow in the winter, and I would get as close to it as possible. It helped fend off the winter temperatures of Kentucky in the late 1970s.

My dad’s friend owned that station, so it wasn’t uncommon for him and his friends to stop by to “loaf” and tell tall tales to pass the time.

In the winter months, that stove was always fired up and it kept the station warm as toast. I will never forget the day I backed up to the old stove to get warm and got a little too close for my own good. I bumped the palm of my right hand into it and instantly had a large blister that wouldn’t go away for some time, and some pretty serious pain to match. The blister and the pain are now long gone, but when I saw the stove at the Rose station, I could almost feel that hot stove on my palm.

Looking around the Rose station I noticed that the front counter had a display with candy from the old days. There were Hershey bars, large rolls of Life Savers, and a couple of other candies that to my knowledge are no longer available.

Remember BB Bats? How about Kits? Each was a taffy candy that came in a few different flavors like vanilla, chocolate, banana, and strawberry. I enjoyed both, but as a young boy who grew up loving baseball the BB Bats were always my favorite. They came on a stick and had a wrapper that featured a picture of a baseball player and little baseballs. No doubt that was part of what first drew me to them.

Seeing both BB Bats and Kits in the display at the gas station reminded me of trips to a neighborhood store that still had a large glass candy case when I wasn’t even old enough to go to school yet. It was just around the road from where most of my mom’s family lived when I was a child, and I remember getting to climb up on a wooden step that went around the candy case and getting all the candy I could fit in the small brown bag the store provided. It probably only cost around a quarter to fill the bag back then as most of the candy was only a few cents a piece. The display at Rose’s station features a price of 1 cent, so a quarter would have gone a long way in there.

The old red Coca-Cola machine that sits to the right side of the station was by no means an unfamiliar site. It was just like the ones most of the small stores near where I grew up back in Estill County featured in my childhood, and I couldn’t wait to raise the lid to take a look inside.

I knew there wouldn’t be cold Cokes in there, or at least I didn’t think there would be, and I was right. But there were a few bottles sitting in the old cooler for nostalgia’s sake.

Memories of having to use a step stool to reach into the old pop coolers of my youth rushed back, and I could almost taste the ice-cold Coke in that little bottle. My great uncle on my dad’s side of the family was a barber. He cut hair for nearly 50 years before retiring, and his shop had one of the old Coke coolers. Going to the barber shop on a Saturday morning was always a treat because I knew I would get at least one little Coke, and maybe more if the wait was very long for me and Dad to get a haircut.

I would open the bottle and more often than not, take one big drink; not because I was thirsty, but to make room for the bag of peanuts I was about to start pouring into the bottle. If you’ve never put peanuts in a cold bottle of Coke you’ve missed out on a treat. Heck, it’s not too late. Give it a try any time. Just make sure you get a glass bottle. Coke is just better in the glass bottle.

There were many other items in the little museum, and they each had their own connection to the past. The Prince Albert tobacco in a can reminded me of my great-grandpa who always rolled his own cigarettes. He started smoking when he was 9 and lived to the ripe old age of 93.

That can of tobacco also brought back memories from my childhood when my friends and I would so cleverly call local stores and ask them if they had Prince Albert in a can. They would of course say that they did, and we would fight back our own laughter as we told them that they better let him out or he would smother.

Well, this has been just a little bit of the past my visit to the old Rose Service Station brought back to mind. I could go on much longer, but for the sake of saving ink at the press, I’ll wrap it up.

If you haven’t stopped in at the station, take a few minutes out of your day and take a look around. See what else the little station has to offer, and find out what memories it stirs from your past. I find myself smiling as I think of the memories I’ve been sharing with you, and I think your visit will leave you smiling, too.