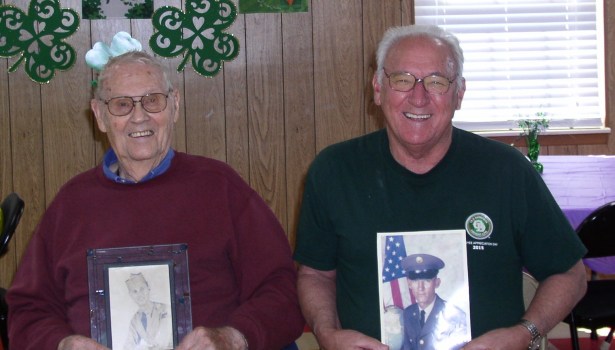 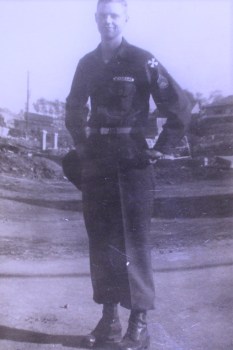 Army Sgt. John McCreary is shown in a faded photograph from 1953 standing on the roof of a Korean school building.

When John McCreary and Dan Bailey were called to service of country, they did not hesitate to present boots on the ground. John and Dan, who served during the Korean and Vietnam Wars, were chosen by the nonprofit organization HonorAir – Knoxville to participate in a ‘quick time’ one-day trip to Washington D.C. as part of a group of fellow veterans.

HonorAir is making its 30th trip on April 13, flying 130 military vets on a tour of attractions in our nation’s capitol. While there, the men will see the WWI, WWII, Korean and Vietnam Memorial Walls, visit the Tomb of the Unknown Soldier, witness the Changing of the Guards and ride down Pennsylvania Avenue. Somewhere in the mix, the veterans will enjoy lunch at the Air Force buildings.

The whirlwind one day excursion will begin in Knoxville at 6 a.m. with an estimated touchdown in D.C. at 10:30 a.m. The estimated 7:15 p.m. plane arrival back home to Knoxville will be met by a horde of well wishers.

John, who is 91 years old, says this will be his first trip to D.C. and he is very excited and grateful for the experience.

He spoke of his time in the service, having made the rank of corporal stateside in just over a year prior to patching his Sergeant stripes onto his uniform while in Korea.

“I had 10 months to go. But they got orders in the company to send everybody oversees who had over 10 months of service.”

John, who was in the 8th Army Division, was stationed where soldiers who were heading for the frontlines passed through.

“I was made a cook but, somehow, I became the director of the mess hall.”

Prior to entering the service, John was bedridden for six months.

“When I got better, they called me. I wasn’t really fit to go but I had to go. That’s why I dreaded it so bad.”

John says he was paid $73 per month for his service.

He recalled several close friendships formed during his time in the military.

“When I went over there, I was in 11 Bravo as an infantry soldier. But, when I got to Korea, they changed my MOS to 11 Charlie. That put me in the motor pool. We moved north and, instead of staying in the pool, they put me on the generators on the DMZ lines to keep the lights lit up for the army. Another guy and I had 20 miles we had to do. We worked 24 on and 24 off.”

Dan says the North Koreans attempted every measure to make the boys homesick hoping that in the process, they could divert their attentions from battle. At about 9 p.m. to 10 p.m. each night, the opposing side would play the hit list of favorite country music over loudspeakers pointing toward the south. Elvis Presley was a headliner on that hit list, he said.

Stationed in what was called “down south,” Dan was eventually transferred to the north inside the combat zone referred to as the DMZ.

“My partner and I got combat pay while we were there. The only problem was we got recalled every three months. We had to stay north to work on the generators.

“They took me off the DMZ for the last month I was there because we had to drive from the barracks to there. They said if we had a wreck, we’d be here for a while. I’d been there 15 months. That was enough for me.”

Dan says he finds it kind of funny that he returned home, making his living driving trucks.

HonorAir flight coordinator Jim Cundall, who is a Vietnam and Desert Storm veteran, says the organization has taken 3,718 vets in total to Washington D.C. during its operation. The trip is flown by American Airlines. The next flight will hold 130 vets, 40 escorts and 16 team members.

Each flight costs the nonprofit $100,000 in privately raised funds.

Cundall spoke of the pause in trips due to COVID-19.

“The last flight taken before this one was in 2019 because of COVID. That flight was supposed to have been an all female flight because that was the 100th anniversary of Women’s Suffrage. They were supposed to go during this next flight in April. They’re remodeling the Women’s Memorial and we can’t get in. We had to move it to October. The good news is October is the 25th anniversary of the building of the Women’s Memorial.”

“When we get back to the airport after the trip home, there’s always a crowd of people – we’ve had as many as 1,000 people at the airport to welcome them home. This veteran was in a wheelchair, needed to be in a wheelchair and was in one all day long. He saw the reception and he motioned to the guy pushing him and said ‘stop.’ He got out of his wheelchair and walked down through all of those people and I don’t know how he even made it. It shows the attitude that they have – ‘I’m not going to be shown as weak.’”

During his last trip, Cundall was made aware just how important these trips are for the veterans.

“Somebody came to me and said ‘Jim, see that guy standing up near the entrance to the Vietnam War Memorial? We can’t get him to go down by the Wall and he’s crying. Would you go talk to him?’ And, of course, we like to have a vet talking to a vet. I walked up and started talking to him and it just hit me. I put my arm around him and said ‘Come on. We’re going to go together.’ And we did. A month later, we had a reunion breakfast where we show a video of their trip. He came up to me and gave me a big hug – it scared me. I’m not used to the guys coming up to me and hugging me. He said ‘Jim. Thanks for making me do that. This is the first peace I’ve had since I’ve been home.’ And, that was 50 years ago. And, every team member can tell a similar story.”

During the trip home, HonorAir holds “mail call” which is often an emotional time for the veterans as they read touching letters from their loved ones and friends.

Anyone interested in writing a letter to John, Dan or veteran Roy Poore (who is also scheduled for this flight) may do so by placing the letter inside an envelope marked for your specific veteran. Then, place that envelope inside one addressed to: HonorAir-Knoxville; P.O. Box 12990, Knoxville TN 37912.

All mail must be received by April 5.

For more information, or to make a donation, go to: www.honorairknoxville.com.