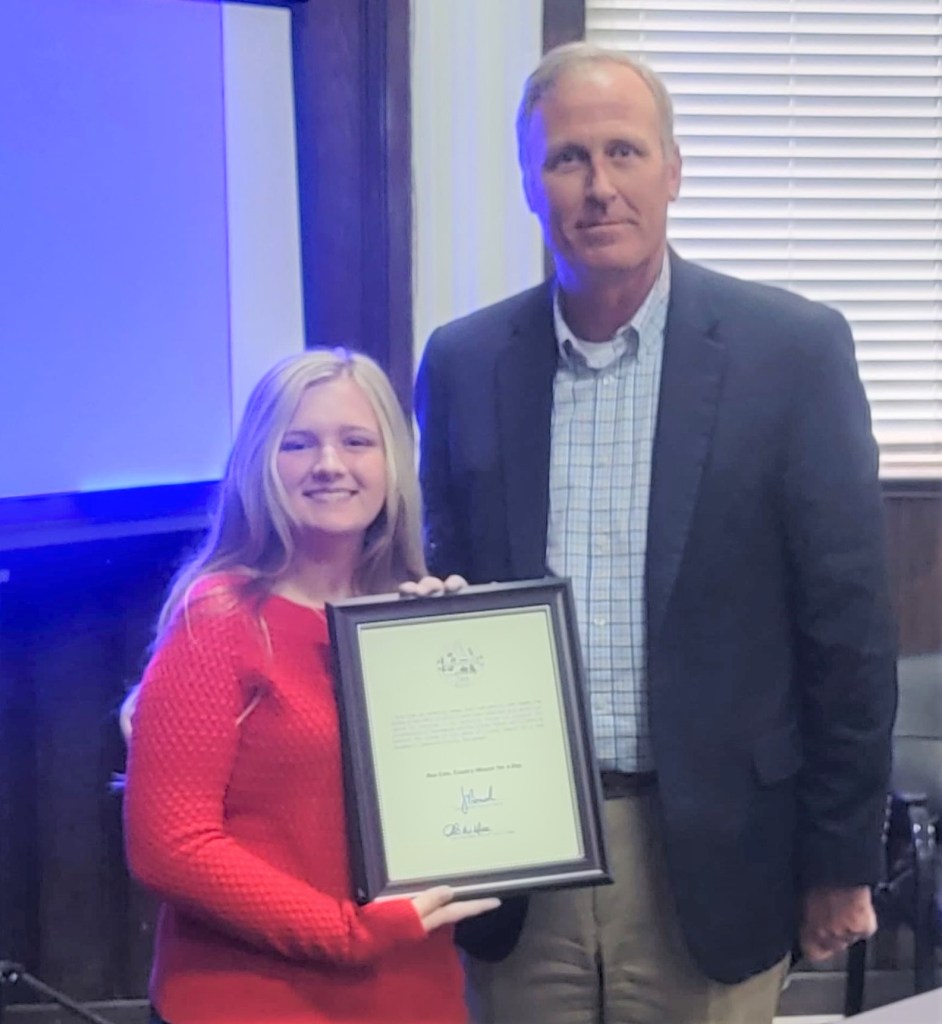 Ava Cole is shown accepting a plaque from County Mayor Joe Brooks during the April 18 meeting of the Claiborne Commission. Cole raised $10,200 in the sales of walkway bricks and pavers, making her the winner of the Claiborne Animal Shelter Fundraiser event. photo by Brian O’Brien

Ava Cole, who recently earned top sales spot for the Claiborne Animal Shelter Fundraiser, asked the Claiborne Commission to consider hiring an animal control officer. The request was made during her presentation at the commission meeting.

Cole, who is a student at Heritage Christian Academy, was one of six who won the annual Animal Shelter Poster Contest. She along with the other five contestants went on to compete in the fundraiser which involved the sale of walkway bricks and pavers.

Cole hit the highest mark, raking in $10,200 for the shelter and bagging a percentage as her sales commission. The other five contenders also received a commission on every sale.

As part of her winnings, Cole was made ‘County Mayor for the Day.’ She was officially sworn into office on April 16 during a ceremony held at the Claiborne County Courthouse. She spent her day as county mayor being escorted to all the county offices by the temporarily unseated Joe Brooks.

The visits were not cursory. Cole spent that time getting acquainted with the county officeholders while learning just what it would take to get her proposal off the ground.

Her presentation, brief and to the point, outlined why the county would benefit by hiring an animal control officer and what it would take to make it happen.

Cole said that 4,609 animals were relinquished to the animal shelter just in 2021. Some 690 animal complaints were received during that same 12 month period. The complaints ran the gamut from reports of animal abuse, strays, animal attacks and animals in the roadways.

An animal control officer would benefit the county by being the one centralized person charged with picking up small domestic animals for transport to the shelter.

Cole said the county would need to set up a hotline number as a single point of contact, separate from the E-911 system or any other emergency number. The county would also need to provide proper equipment and training, she said.

The shelter currently receives about $60,000 annually from the Ann Bowling Trust and $20,000 yearly from county contributions. This year’s expected revenues total $226,600 with expenses expected to be a tad higher at $227,300.

Cole said the estimated $44,500 salary needed to hire an animal control officer could be set aside by increasing the yearly county contribution. She asked that the members of the budget committee run the numbers to see if the funds are there to cover the expense.

She ended her presentation by saying she hoped the county would agree to create a safer environment for both humans and animals. An animal control officer would relieve the burden when dealing with the stray and problematic animal populations. Having an officer would go a long way toward helping reduce the number of unwanted animal to human interactions, she said.