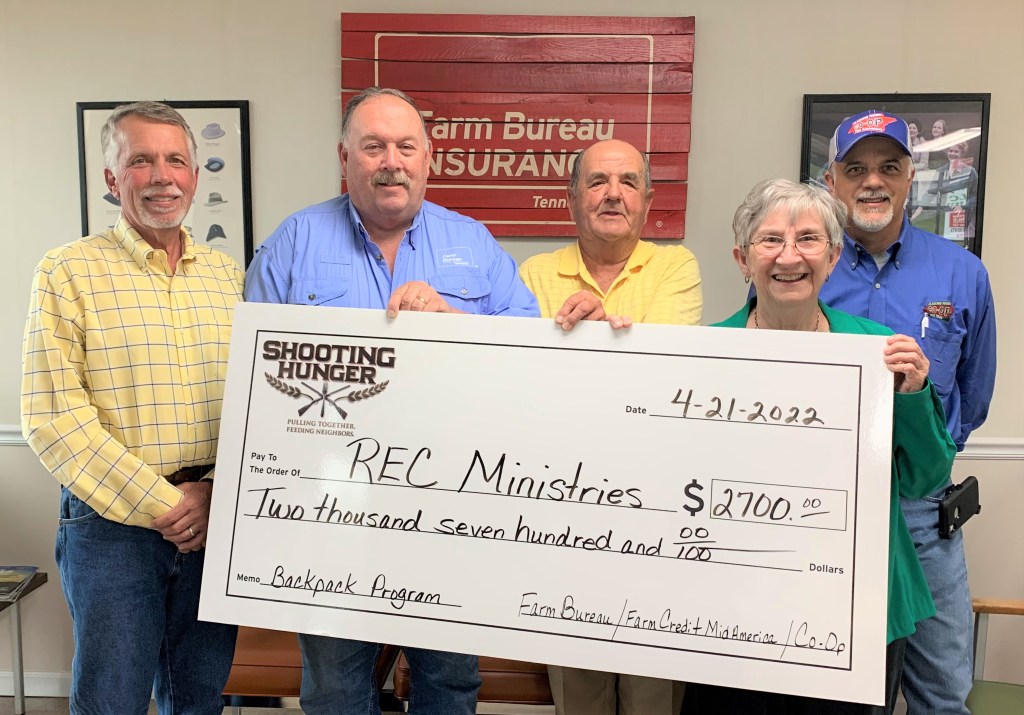 The Regional Education Center (REC) Ministries is the recipient of $2,700 in donations that will be used to purchase backpacks filled with food for hungry students in Claiborne County. From the left are Ricky West, representing Farm Credit Mid-America/Rural 1st, Jim Bell and Jack Day with the Claiborne County Farm Bureau and Rick Keck with the Claiborne Farmers’ Cooperative. Linda Wright with REC Ministries receives the donation.

The Regional Education Center (REC) Ministries was handed $2,700 raised in the annual Shooting Hunger Shooting Clays Event. The money will be used to buy backpacks filled with food for hungry Claiborne County students.

Three entities, an idea and a handshake just seven short years ago cemented a unique approach to addressing hunger inside our state. Discussions between representatives of the Tennessee Farm Bureau and Farm Credit Mid-America/Rural 1st netted the creation of a partnership to alleviate hunger pangs in our communities.

The two entities tossed around several ideas before coming up with a solid plan to raise the funds, to buy the food to donate to the food banks. A handshake was the catalyst in creating an event allowing Tennessee agriculture and Tennessee businesses to unite in the battle against hunger.

During a casual conversation, some of the Farm Bureau staff came up with the idea of a sporting clays shoot. They pitched the idea to their bosses and, after a brief discussion, Shooting Hunger was born.

The first event, held in October of 2015, raised enough funds to provide over 88,000 meals to hungry Tennesseans. One year later, The Tennessee Farmers Cooperative came aboard as a presenting sponsor.

Support for the fundraiser has been phenomenal, with shooter participants making the trip to the annual event from as far away as Nebraska. With sponsors too numerous to mention, the entire Tennessee agriculture industry has been added to the organization’s roster as well.

Shooting Hunger events have raised enough money during its short existence to provide more than two million meals to the hungry in Tennessee.