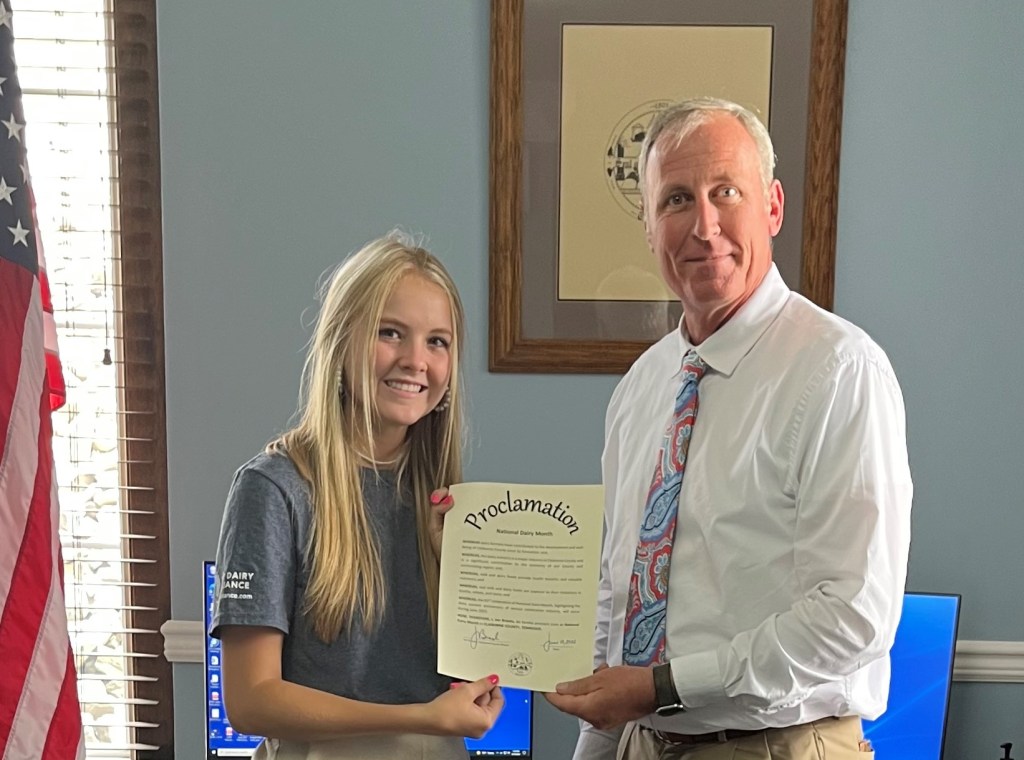 4-H chairperson Addie Brooks is using the month of June to promote all things dairy. Shown is Brooks with Claiborne County Mayor Joe Brooks moments after the official signing of the Proclamation declaring June as Dairy Month. Photo submitted

June is Dairy Month and 4-H Chairperson Addie Brooks is doing her all to promote the benefits of milk to the body and soul. Brooks, who is also a member of the 4-H State Council, is making the tour from library to grocery stores in her mission to inform the public of just how good dairy products taste.

Part of her schedule includes the Hickory Corner Dairy Farms Tour. The event will be held on June 23, beginning at 10 a.m. The Farm is located in Speedwell.

Brooks will be featured in ads this month promoting milk as a great nutritional source while highlighting the continuing legacy of our local dairy farmers, who do their share and more in benefiting our local economy.

June Dairy Month was originally established in 1937 as a grocery milk promotion. Today, it lends itself to placing dairy in the forefront of the public eye.

Brooks is no stranger to promoting milk. She was chosen in 2014 as the program spokesperson and was featured in the Claiborne Progress in June during that year’s Dairy Packs Power Project.

Brooks, a senior at Claiborne High School, is a member of the volleyball, basketball and tennis teams. She also participates in the Key Club, Honor Society and Beta Club. Brooks will attend the University of Tennessee – Knoxville campus with plans to ultimately become a missionary.

Brooks is the daughter of Jeff and Christy Brooks.